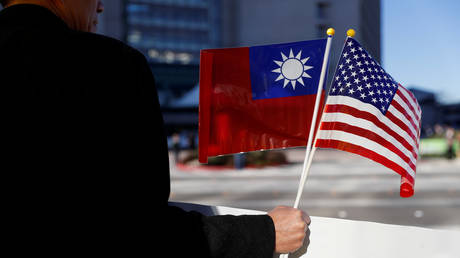 Taiwan is “very willing” to work with the US and other “like-minded countries” to deter China, the island’s president has said, as she met an unofficial delegation from Washington sent as a “personal signal” by Joe Biden.

Taiwan President Tsai Ing-wen met a delegation of former US officials, including former Senator Chris Dodd and former Deputy Secretaries of State Richard Armitage and James Steinberg, on Thursday. The president of the island, which Beijing considers an integral part of the country, condemned China’s military activities off its coast, expressing eagerness to work with Washington to deter Beijing.

We are very willing to work with like-minded countries, including the United States, to jointly safeguard the peace and stability of the Indo-Pacific and deter adventurous maneuvers and provocations.

Tsai also vowed to continue working with Washington to counter “cognitive warfare” and misinformation, allegedly spread by Beijing, but did not elaborate on the matter. Former Senator Dodd said the US’ partnership with Taiwan is “stronger than ever,” promising the Biden administration would be a “reliable, trusted friend.”

Also on rt.com US diplomats arrive in Taipei after China warns Washington to keep out of Beijing’s internal affairs

The unofficial visit to the island is a “personal signal” from US President Joe Biden to show his “commitment to Taiwan and its democracy,” a senior White House official told Reuters. (RT)