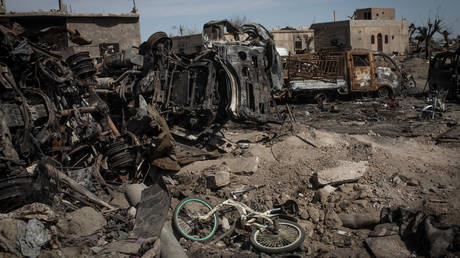 The Syrian permanent mission to the UN stated on Friday that the US must withdraw its troops from the country at once and pay reparations for the deaths of dozens of civilians in a 2019 airstrike in the town of Baghuz.

Damascus categorically rejected a Pentagon report claiming it was not at fault for the attack, declaring its conclusions represent “an admission of negligence that calls for accountability.”

The Pentagon had released a report on Tuesday claiming the March 18, 2019 airstrike targeting an Islamic State (IS, formerly ISIS/ISIL) encampment in Syria’s Baghuz, initially believed to have killed some 70 people, did not violate the rules of engagement or laws of war.

Washington’s assessment ultimately claimed that of the 56 people it determined to have died in the 500-pound bomb blast, just four were civilians. The report also claimed that while “civilians were within the blast radius” resulting in civilian casualties, the decision to drop the massive bomb had “demonstrated awareness for non-combatants.” However, in determining who was considered a terrorist, it used an Obama-era standard classifying all killed military-age males as combatants by default. (RT)