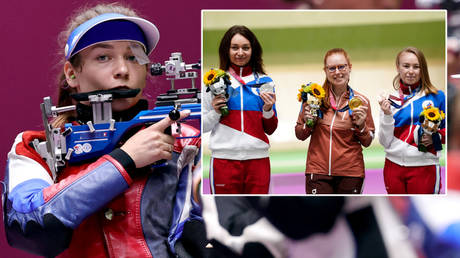 Yulia Zykova pushed champion Nina Christen to an Olympic record in the women’s 50-meter three-position rifle in Tokyo, with the Russian taking silver and compatriot Yulia Karimova winning bronze for her second medal of the Games.

Krasnoyask-born Zykova added another accolade to her haul of medals, which already included three European Championships gold medals, two Military Games titles and the European Games crown in the 50m three-position discipline in 2019.

Zykova had earlier beaten the Olympic qualification record of 1,182 points, only for Christen to become the first athlete from Switzerland to win gold in women’s shooting at the Olympics.

Swiss armed forces shooter Christen was on inspired form, posting a record 463.9 points – putting her 2.0 ahead of Zykova and eclipsing the record held by Germany’s Barbara Engleder by 5.3 points.

For 25-year-old Zykova, the medal was her first of this Olympiad. Karimova, meanwhile, had already been on a podium.

Having taken bronze with Sergey Kamenskiy in the 10-meter air rifle mixed team event, the 27-year-old added another third-placed finish, repeating her result in the team section of the 2018 World Championships.