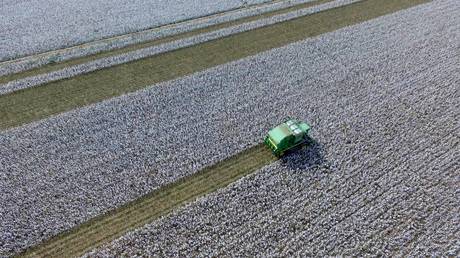 The US’ plans to block imports of cotton from China’s Xinjiang region over the alleged use of forced labor could be impossible to enforce, the US apparel association said, adding that the move may jeopardize global supply chains.

In addition to five Withhold Release Orders (WROs) targeting cotton, computer parts and hair products made by Xinjiang-based companies issued earlier this week, the Trump administration is currently considering a broader ban on imports from the region. New restrictions, expected to be announced in the coming days, may cover cotton and tomato shipments from the Muslim-majority Chinese province.

Also on rt.com US better look at its own ‘slave labor’ problem before banning imports from China – Professor Wolff to RT’s Boom Bust

Testifying at Thursday’s hearing of the House of Representatives Ways and Means trade subcommittee, American Apparel and Footwear Association President and CEO Steve Lamar said that a “blanket WRO” would not have the desired impact on the alleged abuses in Xinjiang. Given that Xinjiang cotton makes up 20 percent of the world’s supply, it would be hard to quickly replace those imports and the whole industry may feel the impact of the ban, he warned.

President of Azerbaijan Ilham Aliyev has changed the name of Veng village of Khojavend region.…

Ilham Aliyev: I am happy person to convey this good news to Azerbaijani people

“Our people are looking forward to a new news from the battlefield and the frontline.…

On October 21, the weather in Baku and Absheron peninsula is expected to be changeable…