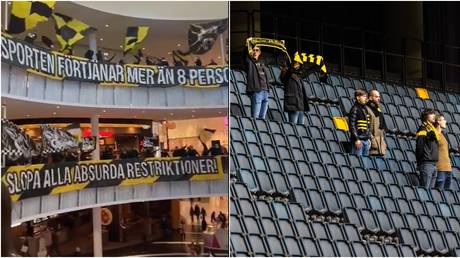 Fans protested in a shopping mall while eight AIK supporters were at the Allsvenskan match with IF Elfsborg at the nearby Friends Arena in Stockholm. © Getty Images / Twitter @Xolazi

Fans of Swedish football club AIK made their disdain clear for coronavirus-related restrictions as they took over a shopping mall while just EIGHT supporters were allowed into a nearby stadium to see their team in action.

Covid-19 restrictions mean that only eight lucky fans are permitted to watch games in stadiums as matches are covered under restrictions on the number of people allowed to gather outside.

However, ‘public places’ such as shopping centers and animal parks are able to host far more people as they continue to operate relatively freely.

AIK fans made their feelings clear about the rules as they stormed the ‘Mall of Scandinavia’ in Stockholm ahead of their team’s match with IF Elfsborg at the nearby Friends Arena on Sunday.

Occupying two tiers of the mall, dozens of raucous fans unfurled banners, waved flags in the club’s yellow and black colors and chanted in unison.

Somewhat bizarrely, across the road at the 50,000-seater Friends Arena just eight fans watched on as their team beat Elfsborg in a top-flight clash thanks to a 49th-minute penalty from Sebastian Larsson.

AIK player Alexander Milosevic questioned the current rules, telling Fotbollskanalen: “We have restaurants where 100 people can enter in a small area and we have as many people as possible inside the Mall of Scandinavia, but in a football arena that takes in 50,000 spectators, eight people enter…

“I have very great respect for the pandemic, but I think this situation is a disaster…

“We see other countries open up. Denmark has opened up. They let in audiences based on the percentage of what the arena takes in.”

Limited changes could be on the way after the government presented proposals for up to 500 spectators to be admitted into stadiums from May 17.

For Swedish football official Jens T Andersson, former CEO of AIK, that was an improvement but still left stadiums such as the Friends Arena way off their capacity.

“500 is more than eight, but that is still very little here in [the Friends Arena], for example,” he was quoted as saying.

Sweden has made headlines by shunning the type of hard lockdowns in other parts of Europe, but was forced to grapple with another spike in cases in April.