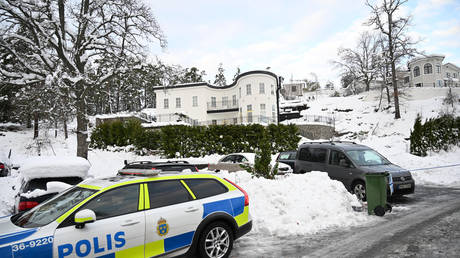 A police car is parked near a house where the Swedish Security Service allegedly arrested two people in Stockholm on November, 22 2022. ©  AP / TT News / Fredrik Sandberg

The individuals were reportedly working for Russia A police car is parked near a house where the Swedish Security Service allegedly arrested two people in Stockholm on November, 22 2022. © AP / TT News / Fredrik Sandberg

Swedish law enforcement have arrested two individuals on suspicion of espionage, domestic security agency SAPO announced on Tuesday. The suspects were apprehended in the Stockholm area during a predawn operation, the agency said in a statement that provided few details on the case.

It stated that the operation, which included house searches, had been conducted alongside police and the Swedish Armed Forces. According to local media reports, citing eyewitnesses, at least two Black Hawk helicopters were deployed in the area to rappel elite police officers.

One of the arrested individuals stands accused of “gross illegal intelligence activities against Sweden and against a foreign power,” while the second one is suspected of “aiding and abetting” such activities. The authorities did not reveal the nationalities of the suspects or specify on which “foreign power” they had been allegedly spying. 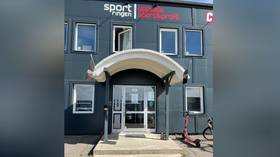 Local media, however, suggested Moscow may have been involved in the affair, reporting that the suspects were actually a couple in their 60s, who had moved to the country from Russia in the late 1990s.

The authorities stressed that the arrests had been carried out after a probe that had “been ongoing for some time” and were not linked to any other cases currently open in Sweden.

Earlier this month, two Iranian-born brothers were charged in Sweden with “aggravated espionage,” having allegedly spied for Russia and its military intelligence service, commonly known in the West by its old initialism, the GRU.

The brothers, one of whom reportedly worked for SAPO itself, had allegedly been spying for Moscow for a decade before being arrested in September and November last year. Both of them have reportedly denied any wrongdoing. (RT)

CBA: ‘Main goal is to create secured and unsecured market between banks’

The Central Bank of Azerbaijan (CBA) decided to raise the interest rate by 0.25 percentage…