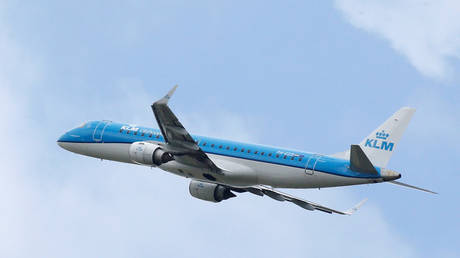 A KLM commercial passenger jet takes off in Blagnac near Toulouse, France, May 29, 2019. © REUTERS/Regis Duvignau

Most people would rather not think about potential death when booking plane tickets, but that didn’t stop KLM India from tweeting advice to passengers on the “safest” seats in an aircraft – just in case things go terribly wrong.

In the event that one is spiralling groundward in an aircraft, the best place to be sitting is in the “rear third” of the cabin, the airline tweeted on Wednesday, citing “data studies” by Time.

The worst place is the middle of the plane, where the “fatality rate” is the “highest” – and the death rate is “marginally lesser” for seats at the front of the plane, KLM’s tweet said.

. @klm: man, we’re sure getting a lot of flak for that breastfeeding tweet.@KLMIndia: hold my Kingfisher pic.twitter.com/LjM0PbZC4O

KLM India had earlier asked its followers if they knew where the safest seats were as part of a competition to win “exciting KLM goodies.”

Needless to say, tweeters were fairly surprised by the choice of question for the “exciting” competition and indeed the airline’s rather blunt answer about fatality rates. Some wondered whether the account had been hacked or if its administrators might have “missed social media training.” (RT)