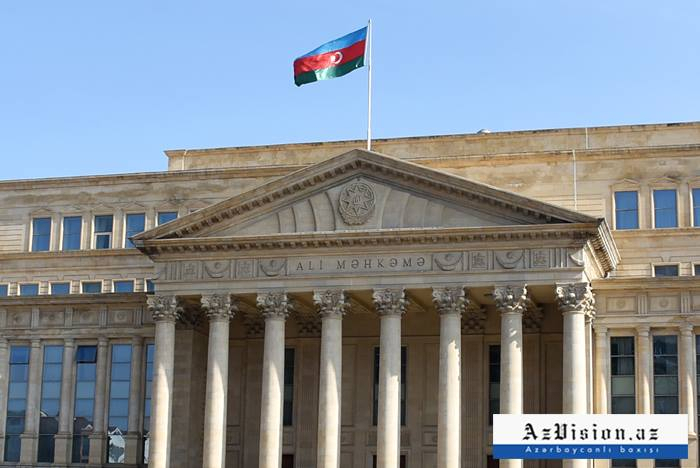 The Supreme Court of Azerbaijan has issued a statement on the killing and injuring of civilians as a result of Armenian army’s targeting peaceful population.

Signed by President of the Supreme Court of the Republic of Azerbaijan Ramiz Rzayev, the statement reads:

It is reported that 15 civilians, including five children, were killed, more than 57 sustained injuries of various degrees as a result of the terrorist attacks committed against the Azerbaijani civilian population. In addition to the reported civilian casualties, serious damage was inflicted upon the civilian infrastructure.

The government of Azerbaijan has declared that at all times it abides by the fundamental principle of international humanitarian law, which requires armed forces to respect the absolute ban against targeting civilians or carrying out attacks that indiscriminately harm civilians. The armed forces of Azerbaijan have affirmed their commitment not to retaliate back against the civilian population, but rather deliver major blows to the legitimate military targets of the enemy on the battlefield.

As a result of the exercise of the inherent right of self-defense in full compliance with Article 51 of the United Nations Charter with a view to restoring the territorial integrity of its internationally recognized borders over the Nagorno-Karabakh region and seven surrounding districts, the Azerbaijani armed forces have liberated a number of Azerbaijani cities and settlements in recent weeks from the Armenian occupation, including the cities of Jabrayil, Fuzuli and Zangilan.

We call upon the international community to strongly condemn the terrorist attacks against the city of Ganja and other residential settlements of Azerbaijan. Those who have perpetrated these heinous crimes against humanity, including the unprecedented massacre committed against the Azerbaijani civilian population in the town of Khojaly in February of 1992, must be immediately apprehended and brought to justice.

We stand by the efforts of the Azerbaijani government to restore its territorial integrity and to implement the explicit terms of the United Nations Security Council Resolutions 822, 853, 874, 884 of 1993, which recognize Nagorno-Karabakh and adjacent districts as an integral part of Azerbaijan and demand for the immediate, complete and unconditional withdrawal of the armed forces of Armenia from the occupied territories of Azerbaijan.”