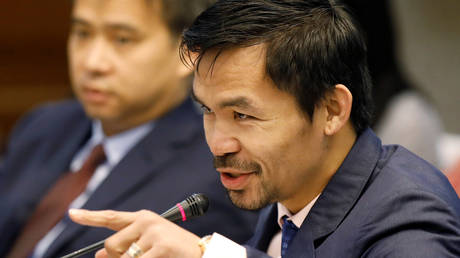 Manny Pacquiao will run for president in the Philippines. © Reuters

Superstar boxer-turned-politician Manny Pacquiao has announced his run as a presidential candidate in the Philippines for next year’s general election but has already received a backlash from its LGBTQ community.

“I am a fighter, and I will always be a fighter inside and outside the ring,” he said during his nomination speech at the mentioned national assembly.

“In the name of our fellow countrymen long asking for the right change in governance and true service to the Filipino people, I wholeheartedly, bravely, and humbly hope for your support,” he concluded.

Work hard in silence, let success be the noise. pic.twitter.com/bg8P2KwDNW

The development comes days after a rival faction in his party put forward the current president Rodrigo Duterte as their choice for vice-president with long-time aide Senator Christopher “Bong” Go running as their presidential candidate, though the latter has said he does not wish to take part.

As a consequence of the divide, the PDP-Laban’s warring factions will have to wait for the Commission on Elections to see which camp is recognized for the general election.

Energy Secretary Alfonso Cusi has already filed a petition to the body and declared that Pacquiao and his allies are the ruling party’s “illegitimate officers”, but before Pacquiao made his speech, Pimentel said: “Whatever happens, the person we will proclaim today will be PDP-Laban’s presidential candidate. I repeat, whatever happens.”

With regards to Pacquiao’s chances of shifting from the country’s most beloved sporting icon to its leader, he came in fifth in a Pulse Asia survey among candidates earlier this year with Davao City Mayor Sara Duterte, who is the current president’s daughter and still yet to confirm her candidacy, and Manila Mayor Isko Moreno topping the poll.

As this might communicate, not everyone is won over by Pacquiao across the Philippines’ diverse population.

In February 2016, the born-again Christian made a video statement to TV5 while still running for senator where he remarked that gay people are “worse than animals”.

“It’s common sense. Will you see any animals where male is to male and female is to female?

“The animals are better. They know how to distinguish male from female. If we approve [of] male on male, female on female, then man is worse than animals,” Pacquiao went on.

Though later backtracking on Instagram by apologizing, the LGBTQ community hasn’t forgiven the athlete, who was dropped by Nike for the outburst.

“Manny Pacquiao is running for president?! As an LGBTQ+ advocate, I’m a NO for this!” said one Twitter user.

“Make sure to check their stands in different social issues like how Pacquiao disrespects the LGBTQ+ community.”

“PLEASE DON’T VOTE FOR MR. MANNY PACQUIAO,” demanded another with a string of red crosses, as separate parties vowed never to do such a thing.

“Senator Manny Pacquiao is unpresidentiable. That’s the tweet,” it was also said. (RT)