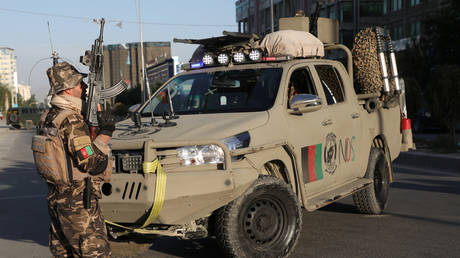 File photo of Afghan security forces in Kabul on May 30, 2020. © REUTERS/Omar Sobhani

A suicide bomber has struck a mosque at the entrance to the international zone in the Afghan capital Kabul during evening prayers, killing one person and injuring at least three others.

Interior ministry spokesman Tariq Arian confirmed that the attacker blew himself up inside a washroom at the Wazir Akbar Khan mosque in the central district, next to the Green Zone – home to international offices, journalists and diplomats – at around 7:25pm local time on Tuesday.

No group has claimed responsibility for the mosque attack. (RT)