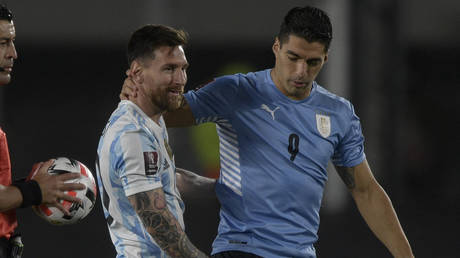 Atletico Madrid striker Luis Suarez has shared the reason why PSG superstar Lionel Messi might be struggling at his new club.

Joining as a free agent from FC Barcelona this summer, the Argentine has mustered just one goal in Ligue 1 thus far.

His exploits with his country in winning the Copa America were enough for a seventh Ballon d’Or this week, but it is thought that the 34-year-old must improve his club form to retain the gong next year.

Criticizing one of his displays, L’Equipe said Messi leaves the impression “that he always plays at the same slow pace and, on occasions, seems disconnected” from the likes of his colleagues Neymar and Kylian Mbappe.

Reunited with one of his best friends in football at the France Football ceremony in Paris on Monday, ex-Barca teammate Luis Suarez has offered a possible motive for the slump to TNT Sports.

“We talk every day, [but] we always try to avoid [discussing] expectations because we are players and we know how we have to act in those moments. We talk about matches, [and] about family,” the Uruguayan said when asked about their friendship.

“He told me that he suffers a lot playing in the cold and the snow.

“You have to get used to what the cold weather is like there, for sure,” said Suarez, who played in England for Liverpool for four seasons.

Leaving the Catalans himself in 2020, Suarez also admitted there were “difficult feelings” for the pair when they had to face each other at the Camp Nou last season, when Atletico Madrid played the Blaugrana on their way to the La Liga title.

“On the other hand, when we play for Uruguay against Argentina it is different.

“They are always beautiful games and having Leo as a rival is difficult and complicated,” Suarez admitted.

In an interview with France Football, Messi has spoken on a number of issues including comparisons with Diego Maradona and his rivalry with Cristiano Ronaldo.

“Honestly, I have never compared myself with Diego, absolutely never,” Messi insisted regarding his compatriot, who passed away in November last year.

“I never paid attention to those comparisons, although some criticisms did bother me in the past.

“I had difficult times in the national team, but not for those reasons. I often get some criticism that makes me angry, but they stay in the changing room. They should stay there, in private.

“It’s the intimacy that makes the group stronger, plus the fact that we can get p*ssed off and tell each other to our faces the things that can be improved. This can happen to me and to other players,” he said. (RT)