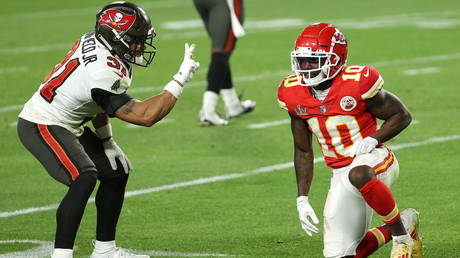 The controversial taunting penalty rule brought into the NFL has already been blasted by fans, players and pundits. Yet anyone claiming it is an attempt to ‘control black bodies’ is merely guilty of race-baiting.

American football, or just football depending on where you’re from, is one of the most complex sports, comparable to chess with the exception that it is played by men with an average weight of 245lbs and height of 6ft 2in.

It evolves every season tactically to mind-boggling levels, with the ruling body of its most elite championship, the NFL, bringing in new rule changes.

Penalties for taunting are 2021’s primary offering, and have already played their part in costing the Seattle Seahawks victory in their Week Two overtime loss to the Tennessee Titans.

DJ Reed really got a taunting penalty for this….. pic.twitter.com/pml5UOjy5r

Tom Brady is like the rest of us. NOT a fan of the new taunting rule. pic.twitter.com/fbFdvFQcXq

Going against the thoughts of his former coach in the dynasty they built at the New England Patriots in Bill Belichick, who has dubbed taunting “poor sportsmanship”, the sport’s greatest ever player Tom Brady has joined the throng of voices against the alteration.

Yet instead of leading a movement to get the ruling scrapped, some parties such as USA Today’s Mike Freeman have argued that it is really about “control of black bodies”.

“Control of the player base, which is 70% Black, has long been the mantra of NFL ownership and some front office members,” opined the sports hack.

“Owners, mostly, don’t see the players as partners. They see them as something to dominate.

“They still see them as cattle, something stated blatantly by former Dallas Cowboys executive Tex Schramm.”

Also on rt.com Ban on taunting in NFL is RACIST? Crackdown on goading is attempt to ‘control black bodies’, claims journalist

Firstly, let’s look at one of the main champions of introducing the rule: New York Giants owner John Mara.

“We get kind of sick and tired of the taunting that does go on from time to time on the field,” Mara said as his motive for getting behind the switch.

Rather than stamp out protest when taking the knee came to the forefront of the discourse thanks to Colin Kaepernick, Mara backed his players despite voicing a preference that they stand during the national anthem.

“I understand the fact and accept the fact that that’s not going to be necessarily popular with certain segments of our fanbase, but I think it’s the right thing to do.”

So why then would he take such a stance that risked alienating supporters and would hit him in the pocket, only to then back a taunting penalty for supposed control of those same men he empathized with?

I partly blame John Mara for these taunting calls, just because your team has been out here getting smoked for the last 5 years and has been taunted against, doesn’t mean you should take emotion out of the game for the players.

Perhaps his enthusiasm for the switch is more rooted in sore pettiness over the Giants’ dismal 18-48 record since 2017, which is the joint-worst in the NFL shared with their cross city rivals the Jets.

With just one playoff appearance since winning the Super Bowl in 2012, a first-round, Wild Card exit against the Green Bay Packers in 2016, there is certainly plenty for rival players to taunt the Giants about.

No wonder Mara is sick of it. But racism, really?

As for the Dallas Cowboys, their owner Jerry Jones even went as far as to take the knee with his players; hardly the plantation owners Freeman would have you think.

#DallasCowboys owner Jerry Jones takes a knee with his team ahead of the singing of the National Anthem during #DALvsAZ#TakeTheKneepic.twitter.com/iImKU8ABGC

One thing that plenty can agree on is that taunting is part of the sport as long as it doesn’t go over the top.

But to seemingly claim ownership of it on the behalf of the black community also doesn’t sit well.

Granted the NFL is 70% black, but taunting is carried out by players of all races, while Freeman has been pulled up on Twitter for overreaching in pushing others to conclude that white players won’t be flagged due to the color of their skin.

Known as ‘sledging’, taunting is just as much a key component of white-majority sports such as cricket, with the Ashes series played between an England team predominantly made up of posh private school boys and an Australian outfit composed of surfers, city slickers and country folk where it is most commonly found.

Jimmy Anderson laughs off reports that he hasn’t received a knighthood yet due to concerns about sledging when England go to Australia for the Ashes. pic.twitter.com/HZPxi5maZe

Can we think about Cricket without thinking of Jimmy Anderson shushing Mitchell Johnson? Noooope. 🤣🤣🤣 pic.twitter.com/yu08grsjVO

Just like this past weekend’s #EmmysSoWhite campaign, Freeman seems to be race-baiting for the sake of it, finding problems where there aren’t any by bringing skin color into something that is a blanket rule for everyone.

Surely the energy of a race and inequality editor would be better spent on genuine issues, such as the lack of black coaches in the league and the poor execution of the Rooney Rule?

“One theory is that the league knew it might face potential backlash from conservatives over some of the social justice measures it planned to enact this season, and the taunting rule emphasis was a way to appease conservatives who don’t like the measures,” Freeman writes, before adding: “The taunting rule is a sort of social justice counterbalance.”

Also on rt.com The Emmys were too white? Oh please, give up this obsession with people’s skin colours and concentrate on talent

Nonsense, just like the overall point that somehow NFL players can be in any sense controlled.

Routinely the highest-paid players in the world of any profession, showered with endorsements, and with millions of followers on social media accounts where they often voice their views – for better or for worse – players also have the kind of financial freedom to sit out whole seasons if they wish.

Rather than make presumptions on their behalf, it might be an idea to ask them what they think about the rule.

You may well find that any criticism would be about its ridiculousness and how it hampers the balance and integrity of the game, as opposed to feeling controlled along the lines of race.