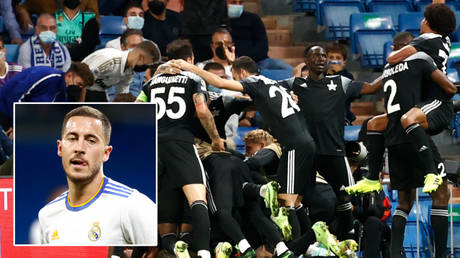 The first player from Luxembourg ever to in the Champions League did it with a last-minute wondergoal as Sheriff Tiraspol produced a huge upset to beat Real Madrid, whose starting stars included Eden Hazard and Karim Benezema.

On a night of firsts, the Moldovan champions secured one of the greatest surprises in the history of the competition by beating the 13-time champions at a stunned Bernabeu, where the least experienced side to take part this season beat the most historically successful team in European football in dramatic fashion.

Uzbek winger Jasurbek Yakhshiboev headed the opener after 25 minutes, although most onlookers would still have tipped heavyweights Madrid to earn a point or three after narrowly winning at reigning Italian champions Inter Milan in their Group D opener.

Madrid rained in 31 attempts on goal to their visitors’ four in an increasingly desperate attempt to restore parity, finally drawing level when usually-reliable hitman Karim Benzema converted a 65th-minute penalty.

What a strike to win it for Sheriff against Real Madrid! 🚀Sebastien Thill will never forget tonight… ✨#UCLpic.twitter.com/Az6d29CuRM

Not to be denied, Sheriff secured the points at the death when Sebastien Thill, a Luxembourg international who scored the only goal for his nation in a memorable Euro 2016 qualifier against North Macedonia, half-volleyed an unstoppable long-range effort beyond former Chelsea goalkeeper Thibaut Courtois, sealing a shock win in the 90th minute.

Read more:   Who's going and what will they be discussing?

Thill is on loan to Sheriff from a Luxembourg club that plays at a stadium with a capacity of well under 5,000 – a capacity that is around a 16th of Madrid’s vast home stadium.

“We played a really good game. The side were so brave with how we played and luckily enough I was able to score a bit of a stunner.”

The Liga leaders started with an illustrious lineup including Eden Hazard, Chelsea’s Player of the Season before he joined Madrid in a deal that could be worth around $203 million.

“More than worried, we’re annoyed,” said the revered coach after his greatest setback since he rejoined the club from Premier League Everton earlier this year.

“We played with intensity and were looking good. We lost because of small details, even though the side played well.

“We could have been better when it came to the final third but it’s tough to explain.

“We had chances, we were creating out wide and Jovic came on and had a couple of opportunities. I think that, in the end, everything went well for them and badly for us.

“It’s small details that cost us this game. It’s a lesson for us in the future as it’s a defeat we didn’t deserve.”

Ancelotti described the group as “wide open”, with Sheriff now three points clear of Madrid in pole position to qualify in one of the top two places that would ensure a place in the knockout stages.

As you marvel at #Luxembourg international Sebastien Thill’s winner in Madrid, watch his father Serge Thill score the best goal I’ve ever seen with my own eyes. This was the season they changed the laws so you could score straight from the kickoff.https://t.co/3yt2310j7o

Also worth mentioning: Sebastien Thill (Sheriff Tiraspol), Olivier Thill (Vorskla Poltava), and Vincent Thill (now also at Vorskla Poltava) are brothers. All three play for #Luxembourg but are still to be ligned up together. Both their parents played for the national team too.

The club had to play eight qualification games to reach the group stage, serving notice of their threat when they beat competition regulars Dinamo Zagreb 3-0 in their decisive qualifying tie.

“We aren’t thinking about the last 16 yet as we still haven’t done anything extraordinary,” claimed manager Yuriy Vernydub. “We’re just going forward step by step.

“We have four very important games to go and, when it comes to the final group stage game, then we’ll talk about the next round. (RT)