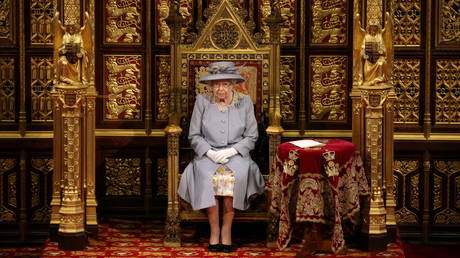 Queen Elizabeth II prepares for her speech in the House of Lords during the State Opening of Parliament in London, UK, May 11, 2021. ©  Chris Jackson/Pool via REUTERS

The son of a wealthy Washington, DC lawyer and schoolmate of President Barack Obama’s daughters led the vote by a group of Oxford University students to remove the portrait of Elizabeth II to make their common room a ‘safe space.’

Matthew Katzman, 25, graduated from Stanford University and is now a doctoral student in “complexity theory,” British newspapers reported on Wednesday.

As president of the Magdalen College’s Middle Common Room, Katzman had tabled the motion to remove the portrait of the queen from the area, arguing that it is “meant to be a space for all to feel welcome” while the monarch “represents recent colonial history.”

He is the son of commercial lawyer Scott Katzman, whose Washington, DC mansion is worth more than $5.5 million, according to the Daily Mail. Prior to Stanford, Katzman studied at Sidwell Friends School, a prestigious Quaker academy in the US capital that is the school of choice for presidential offspring.

Read more:   Animals have an astounding response to bushfire. These are the tricks they use to survive

Obama’s elder daughter Malia was a student at Sidwell around the same time as Katzman. Her younger sister Sasha is also an alum, as are Chelsea Clinton, Nancy Reagan, and the children of Richard Nixon and Theodore Roosevelt. Grandchildren of current US President Joe Biden attended the school as well. (RT)