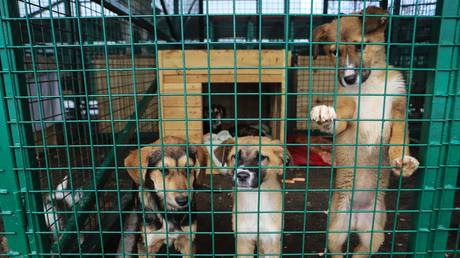 Puppies are seen in an aviary at the Vladpitomnik shelter for homeless animals in Vladikavkaz, Republic of Northern Ossetia-Alania, Russia. © Sputnik / Denis Abramov

Rescued animals that cannot be re-homed could be euthanized by Russian authorities under rules put forward by government MPs that would make it easier for local officials to free up shelter space and crack down on packs of strays.

A new bill proposed by lawmakers from the United Russia party would give regional administrations more power to independently decide whether to put down homeless animals. Procedures would have to be “carried out by veterinary experts in a humane manner to ensure a quick and painless death,” the draft law maintains.

At present, legislation allows officials to capture, sterilize and vaccinate stray cats and dogs, before releasing them back into the wild. This, lawmakers say, prevents the animals from reproducing, but doesn’t stop them posing a threat to people. A spate of complaints about packs of stray animals terrorizing communities across the country has led to calls for a change in the law. The MPs sponsoring the new measures argue that, on the streets, “dogs unite in groups, which poses a threat to the population, as they become more aggressive.”

However, the policy has been met with anger from animal rights groups. “We will fight and will do everything in our power to reject it,” Svetlana Safronova, director of the international charity Giving Hope, said.