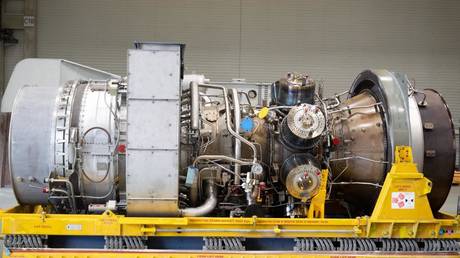 Siemens Energy has offered to create a playlist on the Spotify streaming platform for the Nord Stream gas turbine, which is stuck in Germany with international sanctions preventing its return to Russia.

“Our famous turbine is still not where it should be. It stands alone on our site in Mülheim an der Ruhr. Let’s do the poor thing a favor and create a Spotify playlist,” the company tweeted on Wednesday, proposing to start with the song ‘So Lonely’ by The Police.

Social media users responded to the call with The Clash’s ‘Should I Stay or Go?’ quoting one of its verses: “If I go there will be trouble. And if I stay it will be double. So ya gotta let me know Should I stay or should I go?”

Among the other proposals were Queen’s ‘I want to break free,’ and ‘Life’s a Gas’ by T. Rex, as well as Limahl’s ‘Never Ending Story’. 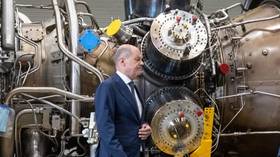 Twitter users suggested that the playlist should include ‘Tired of Being Alone’, ‘Enjoy the Silence’ by Depeche Mode and ‘Lemon Tree’ by Fools Garden.

Russia’s Gazprom has also joined in, advising Siemens to include the track ‘Breaking the Law’ by Judas Priest.

The Nord Stream 1 gas turbine has become the focus of an energy row between Russia and Germany, after having undergone maintenance in Canada. It was meant to be transported to the pipeline’s compressor station in Russia back in May, so the gas flow to EU could be maintained at full capacity.

However, after weeks of delay in Canada over Ottawa’s refusal to return the critical part due to its sanctions on Moscow, it is now stuck in Germany. Russian energy major Gazprom has insisted that Western sanctions are hindering the return of the turbine from Germany and threaten future equipment maintenance at the Nord Stream 1 pipeline. According to the company, the paperwork for the part’s return is not in order, as it was issued by Siemens Energy and not the firm that is contracted by Gazprom.