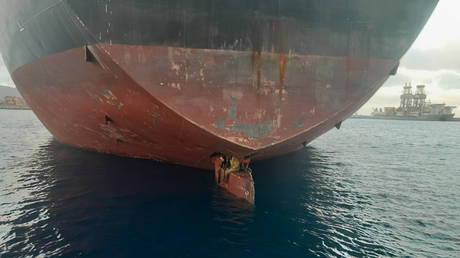 Spanish authorities have rescued three men who became stowaways perched on top of the rudder of an oil tanker traveling from Lagos, Nigeria to the Canary Islands. The migrants had been at sea for 11 days, according to Marine Traffic, a ship-tracking website.

A photo distributed by the Spanish coast guard shows the three men sitting on the rudder of the Maltese-flagged tanker Alithini II, which docked in Las Palmas on Monday. It’s not clear if the men spent the entire journey on the boat’s rudder.

Spanish news agency EFE has since reported that the stowaway Nigerians have been rescued and taken to hospital where they have been treated for moderate dehydration and hypothermia.

Salvamento Maritimo, Spain’s maritime rescue agency, says it has had to deal with six similar cases in the last two years. Sofia Hernandez, who heads the service’s coordination center in Las Palmas, told AP that migrants tend to seek cover inside the box-like structure around the rudder. 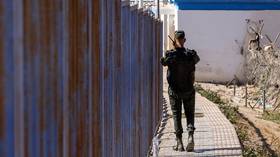 She noted that traveling in such a way is “very dangerous” as the stowaways remain exposed to bad weather and rough seas. Additionally, depending on the weight of the cargo aboard the tanker, the rudder could be completely submerged in water, posing a significant hazard to the illegal travelers.

Txema Santana, a journalist and migration adviser to the Canary Islands, has stated that “It is not the first and it will not be the last” time stowaways attempt to make such a risky journey, noting that not all of them will have “the same luck.”

Read more:   The United States is set to 'drown the world' in oil

The Spanish-owned Canary Islands have been a popular gateway for African migrants trying to sneak into Europe. However, since 2014, some 2,976 migrants have died or gone missing after failed attempts to make the crossing, according to the International Organization for Migration.

Spain’s Interior Ministry has reported that as many as 11,600 people have reached the Spanish islands by boat so far this year, as migration to the archipelago has reportedly grown by 51% in the first five months of 2022 compared to the year before. (RT)