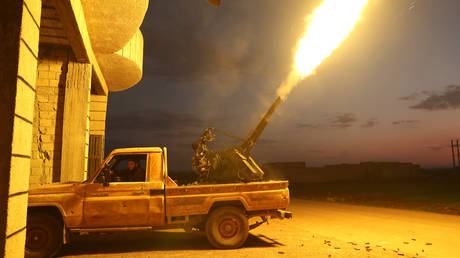 The US media and officials who stubbornly keep referring to armed groups dominated by an Al-Qaeda offshoot in Syria’s Idlib province as ‘rebels’ only disgrace themselves and their country, US Congresswoman Tulsi Gabbard has said.

Gabbard, who is one of the Democratic Party contenders in the 2020 presidential race, castigated American mainstream media and Trump administration officials for a consistent effort to whitewash the extremists entrenched in the north-western province of Idlib – Syria’s last major stronghold of anti-government forces. Such actions betray the memory of the 9/11 terrorist attack, one of the worst tragedies in modern American history, she said.

.@realDonaldTrump needs to make it clear to NATO and Erdogan that the United States will not be dragged into a war with Russia by the aggressive, Islamist, expansionist dictator of Turkey, a so-called “NATO” ally. #StandWithTulsipic.twitter.com/Fbjv7m3jcm

The corporate media needs to stop referring to Al-Qaeda and their affiliated groups in Idlib as ‘rebels’ in a deceptive effort to make them seem like freedom fighters. I and thousands of Americans enlisted after Al-Qaeda’s attack on 9/11. The media and the Trump administration’s continued labelling of these terrorists as ‘rebels’ is a disgrace and dishonor for all our men and women in uniform and our entire country.

In her address, published on Twitter, the congresswoman also demanded that US President Donald Trump refrain from aiding Turkey in what she called its “invasion of northern Syria,” which she said might lead the US to a conflict with Russia. She also called on Congress to pass her Stop Arming Terrorists Act, which would bar Washington from assisting countries supporting terrorist groups.

The US special representative, James Jeffrey, recently stated that he had not seen Hayat Tahrir al-Sham – an Al-Qaeda offshoot controlling most part of militant-held Idlib – “planning or carrying out international terrorism attacks.” This statement, referring to a group already designated a terrorist one in the US itself, provoked an angry reaction from Moscow, which called it “absolutely unacceptable.” (RT)

12:00 Being US ally is valuable but COMPLICATED, German FM says after Pentagon reportedly told its troops to pack up