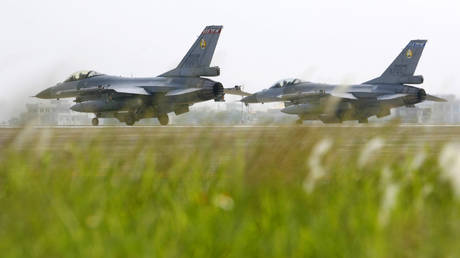 Despite extreme objections voiced by Beijing, the State Department has approved the sale of dozens of F-16 fighter planes to Taiwan, openly admitting that the move serves US economic and national security interests in the region.

The approval of the $8 billion sale by the Defense Security Cooperation Agency (DCPA) came just days after plans to supply 66 fighter jets to Taipei were greenlighted by the White House. In approving the proposed deliveries, the DCPA reasoned that additional arms will help maintain “political stability, military balance, and economic progress” in the region.

This proposed sale serves US national, economic, and security interests by supporting the recipient’s continuing efforts to modernize its armed forces and to maintain a credible defensive capability.

The prospects of yet another weapons sale by the Trump administration to Taiwan, which still has to be approved by Congress, drew ire from Beijing, which repeatedly slammed all US attempts to arm the enclave, that China considers an integral part of the mainland. (RT)

The Azerbaijani armed forces have destroyed another unmanned aerial vehicle (UAV) of the Armenian army.…

The Azerbaijani Foreign Ministry and Azercosmos OJSC have issued a joint statement: “Illegal activities of…

The Jerusalem Post: Azerbaijan-Israel partnership is strong, resilient, and forward-looking

The Jerusalem Post newspaper has published an article by Azerbaijan’s Minister of Economy, co-chair of…

16:52 To His Excellency Mr Joko Widodo, President of the Indonesia

16:52 Azerbaijan increases fruit and vegetable export by more than 2%

16:26 U.S. signs deal on redeployment of its troops from Germany to Poland

14:52 How to minimize risks of sedentary work