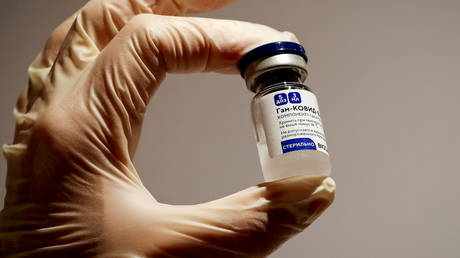 A medical specialist holds a vial of Sputnik V vaccine against the coronavirus. © Reuters / Shamil Zhumatov

Claims by German paper Bild that the deal to supply Sputnik V to Germany is ‘dead’ have nothing to with reality and are only aimed at preventing the Russian jab from reaching the European market, the vaccine’s sponsor has said.

The talks with Germany are ongoing and the vaccine may be supplied to the country in June, the Russian Direct Investment Fund (RDIF) pointed out in a statement on Telegram. Any German supplies will not affect other countries that also rely on Sputnik V in their Covid-19 vaccination campaigns, it added.

Earlier on Sunday, a report in German tabloid Bild claimed that the negotiations between Russia and Germany were “dead.”

According to the paper, unnamed participants in the talks told it that Moscow would not be able to supply Sputnik V to Germany in June or July, and after that the country would have no use for it.

They also insisted that the only way for Moscow to find enough doses for its German customers would be cutting deliveries to India, which has recently been setting records in its numbers of daily coronavirus infections and fatalities. (RT)