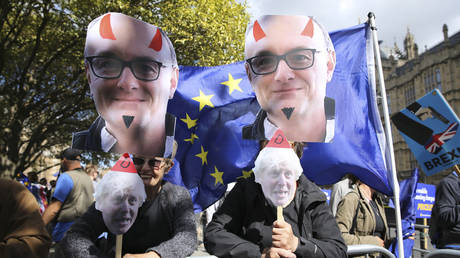 Brendan O’Neill, the editor of Spiked, has provoked the wrath of EU Remainers after suggesting many of them are suffering from ‘Cummings-derangement syndrome’ as they seek Brexit revenge on Boris Johnson’s chief advisor.

During a debate about the Dominic Cummings controversy on ITV’s Good Morning Britain program on Monday, O’Neill took aim at what he called “hysterical remoaners.” In the past 10 days, the UK prime minister’s key aide has been at the center of a scandal over his apparent flouting of Covid-19 lockdown rules.

Cummings, the former ‘Vote Leave’ campaign director, is widely regarded as the chief architect of the successful 2016 EU referendum campaign that saw the UK vote to exit the European Union.

O’Neill who edits Spiked, the online British magazine that focuses on issues of freedom and state control, told Good Morning Britain co-hosts Piers Morgan and Susanna Reid that the intensity of the fury directed at Cummings is driven by “the revenge of the remoaners.”

I really do think this has become hysterical. A lot of people, it seems to me, are suffering from ‘Cummings-derangement syndrome.’

‘A lot of people it seems to me are suffering from ‘Cummings-derangement syndrome’.’Spiked Online editor Brendan O’Neill says the criticism of Dominic Cummings is driven by a ‘revenge of the remoaners’. pic.twitter.com/wdERDfIlHt

O’Neill also had harsh words for Morgan and Reid’s industry, in the role it has played in the Cummings saga, claiming that the “media has stirred up a witch hunt against him.” (RT)