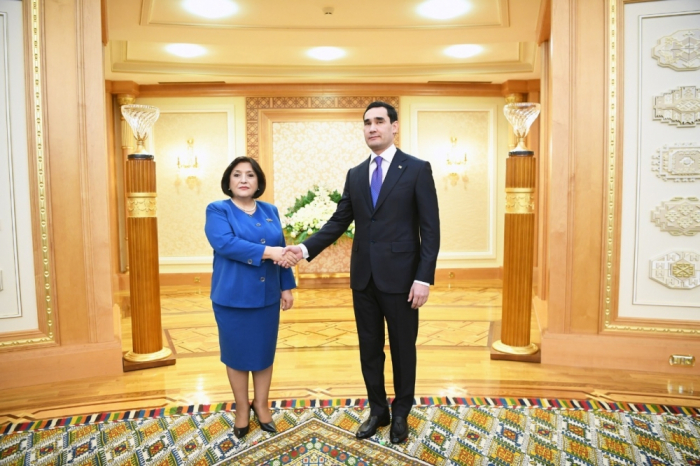 Speaker of the Azerbaijani Milli Majlis Sahiba Gafarova has met with President of Turkmenistan Serdar Berdimuhamedov as part of her official visit to the country.

Speaker Sahiba Gafarova thanked for the hospitality shown to the Azerbaijani parliamentary delegation, saying then that this was her first visit to Turkmenistan as a Speaker of the Azerbaijani Parliament. Recalling that this year marked the 30th anniversary of the establishment of diplomatic relations between Azerbaijan and Turkmenistan, Speaker Sahiba Gafarova emphasized that the relations between the two friendly countries have successfully developed and covered many fields throughout these years.

Speaker of Milli Majlis Sahiba Gafarova mentioned that the two countries’ parliaments maintain fruitful cooperation, adding that there are great opportunities to further deepen these ties. “Both legislatures have friendship group, and the parliamentarians reciprocal visits, as well as mutual activity within the framework influential international parliamentary organizations contribute to the development of relations between the two countries,” Sahiba Gafarova noted.

During the meeting, the sides also exchanged views on other issues of mutual interest.