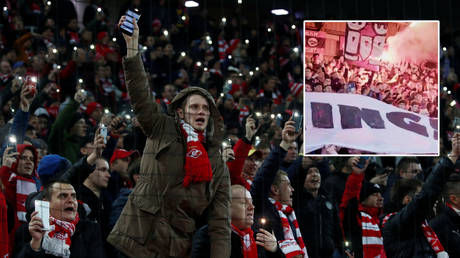 While some of the most high-profile football clubs in the world have suffered a week of public relations disasters, the likes of Spartak Moscow have produced ingenious Super League ripostes, picking up new fans along the way.

As the 12 clubs to have joined the widely-derided new European Super League (ESL) have been blasted for their social media posts coldly announcing their involvement and swift departure, other teams around the world have come up with inspired responses to the bombshell news that has left many supporters questioning whether the game has lost its soul.

Russian giants Spartak Moscow, who watched on while the likes of Real Madrid, Barcelona, Juventus and five Premier League clubs declared their departure from the established European competition system to take part in the multi-billion dollar new format, were one of the first teams out of the blocks.

“If you need a new club to support, we’re always here for you,” wrote the third-placed Russian Premier League team to lovers of all of the clubs planning to break away, also featuring Italian heavyweights AC Milan and Inter Milan and LaLiga contenders Atletico Madrid.

The enterprising announcement swiftly went way beyond Spartak’s relatively modest Twitter following of more than 35,000, earning well over 300,000 likes and retweets within 48 hours, as well as more than 5,500 replies in a worthy reward for the welcome touch of humor amid angry accusations of greed and cynicism towards the ESL.

If there were far more eyes than usual on Spartak, their newfound admirers would not have been overwhelmed by their latest result – a 3-0 home defeat to relegation-threatened Ufa which might have reminded Chelsea fans of their recent shock 5-2 capitulation to West Brom, or Manchester United followers of their 6-1 drubbing by Tottenham earlier this season.

While top-flight clubs in England, Italy, France and Spain issued press releases distancing themselves from the ESL and denouncing the move that went behind their backs, some smaller clubs had a field day.

We wish to confirm that we will not be taking part in any European Super League.

Bray Wanderers, who play in the League of Ireland First Division and have a stadium capacity of 7,000, received laughter and admiration from around the world by writing: “We wish to confirm that we will not be taking part in any European Super League.”

Some suggested that Bray were little further from deserving to be recognized as European contenders than Tottenham and Arsenal, given how far the north London rivals are from qualifying for continental competition through the merit of their league positions following poor campaigns for both clubs.

“Huge respect to Bayern Munich and Bray Wanderers for not joining the Super League,” applauded one reader, referring to the refusal of the Champions League holders and German champions to join what was perceived almost unanimously by fans as a sham.

Forget the ‘Super League’ – support your local team in your city, with your friends and family – wherever that may be. #SupportLocal#FanOwnedFootball#TerracesNotTVpic.twitter.com/4toNOBNzG3

Man United fan my whole life but the last two days along with the pandemic has shown we should really be supporting local. looking forward fo getting to know the club and history.

Bohemian Football Club, based in Dublin, also demonstrated Irish wit and a talent for videography.

Read more:   Franco-German treaty: An Alternative to NATO, a Warning to US - COMMENT

Accompanying their post with a film comparing the differences between watching United on television and a local club in person, the 131-year-old club offered a message that almost all sporting institutions around the world would endorse.

“Forget the Super League,” they urged. “Support your local team in your city with your friends and family – wherever that may be.” (RT)