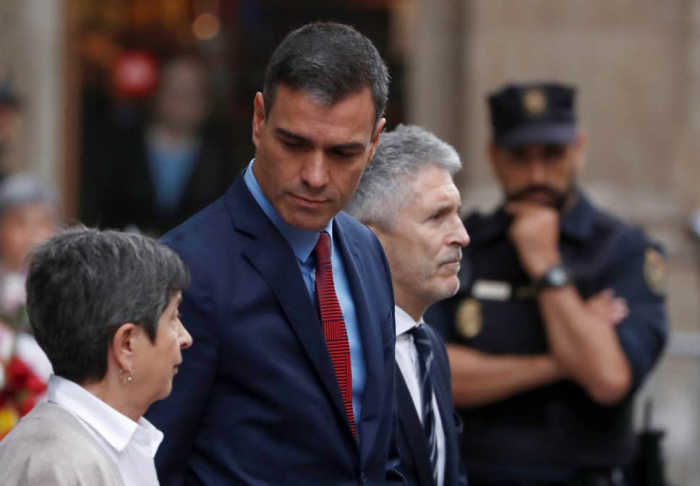 Spain’s prime minister has angered Catalan independence leaders after refusing to meet with them on a visit to the protest-hit region on Monday.

Barcelona has been the focus of a week of protests by separatists sparked by the jailing of nine pro-independence politicians for their role in Catalonia’s failed 2017 declaration of independence.

During his visit Pedro Sanchez, who is acting prime minister of Spain in the middle of an election campaign, blamed the regional government for failing to restore order.

He said Quim Torra, the pro-independence regional leader, had “turned his back” on security forces and called on him to condemn violence by protesters.

Mr Torra said in a statement that he had always condemned violence. His government also criticised Mr Sanchez for failing to enter into dialogue with pro-independence focus.

The regional government says Mr Torra had asked for a meeting during Mr Sanchez’s visit but that it was not clear whether it would take place.

“Sanchez is refusing dialogue for the umpteenth time. [This shows] disrespect to the people of Catalonia,” a spokesperson for the pro-independence ERC party said.

The interior ministry said on Sunday that 288 police had been hurt in clashes with protesters and that 194 people had been arrested.

Mr Sanchez was greeted by peaceful protesters blowing horns as he entered the regional police headquarters on Monday – one of the focal points of the week’s protests.

Last week Carles Puigdemont, the former regional president who is in self-imposed exile in Belgium, turned himself into authorities to contest an international arrest warrant activated by Spain. The pro-independence leader is wanted by Spanish authorities for his role in the failed declaration of independence. He was released on bail.

Mr Sanchez faces a general election on 10 November this year, which he called after political deadlock prevented him from forming a coalition government. It will be Spain’s fourth general election in as many years, and the second in 2019.