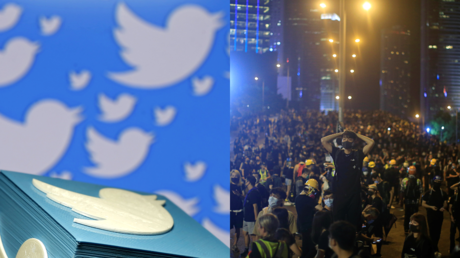 In another high-profile purge, Twitter has announced the deletion of nearly 1,000 accounts from its platform, citing fears that “Chinese bots” are “sowing discord” in Hong Kong after months of heated protests there.

After coming under fire recently for its alleged role in protests in China, Twitter has taken steps to combat what it called a “significant state-backed information operation focused on the situation in Hong Kong,” according to the company’s Monday blog post. In all, the firm said 936 accounts were permanently suspended “for a range of violations” of its policies.

We’re disclosing coordinated account activity focused on the ongoing protest movement in Hong Kong. Our investigations have found that these accounts are linked to state-backed information operations from mainland China.https://t.co/Pc9R90Dp85

“Based on our intensive investigations, we have reliable evidence to support that this is a coordinated state-backed operation,” the blog post said of the deleted accounts. “Specifically, we identified large clusters of accounts behaving in a coordinated manner to amplify messages related to the Hong Kong protests.”

Using the “sow discord” language directly out of Special Counsel Robert Mueller’s report, the company’s blog post reads much like a rehash of the 2016 presidential election, in which so-called “Russian bots” supposedly played an outsized role.

Also on rt.com The only ‘Russian bots’ to meddle in US elections belonged to Democrat-linked ‘experts’

Also reminiscent of 2016’s “Russian bot” craze is Twitter’s connect-the-dots reasoning, in this case identifying a “cluster” of suspicious accounts “behaving in a coordinated manner,” though the company did not elaborate on how such a determination was made. A recent court ruling determined Mueller’s team did not prove any connection between the Russian government and the company that managed the purported “Russian troll farm” – despite making very similar claims of “coordinated behavior.”

Twitter is certainly no stranger to purges, especially those of the politically motivated variety; in recent months, in fact, the company apparently can’t keep its hands off the banhammer. (RT)