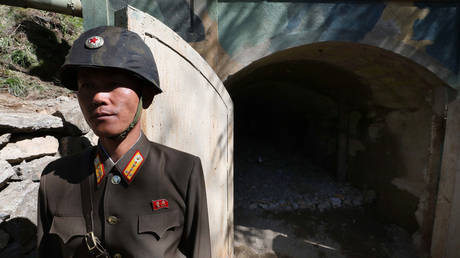 FILE PHOTO. A North Korean soldier stands at the entrance to a tunnel at the Punggye-ri nuclear test site. ©  Handout / News1-Dong-A Ilbo via Getty Images

Pyongyang could conduct its seventh nuclear detonation within weeks, according to a Seoul lawmaker FILE PHOTO. A North Korean soldier stands at the entrance to a tunnel at the Punggye-ri nuclear test site. © Handout / News1-Dong-A Ilbo via Getty Images

North Korea could test a nuclear device at some point between October 16 and November 7, a South Korean lawmaker has claimed, citing the country’s foreign intelligence agency.

The assessment was allegedly part of a closed-door briefing that the National Intelligence Service (NIS) gave to the parliamentary intelligence committee, and was made public on Wednesday by Yoo Sang-beom, a legislator from the ruling People Power Party, who sits on the oversight body.

The timeline was identified based on the dates of scheduled political events in China and the US, the MP explained. On October 16, the Chinese Communist Party will start its 20th National Congress, and November 7 is the eve of the midterm elections in the US.

Read more:   Emissions fall due to lockdowns will have no effect on climate, researchers say

The intelligence agency claimed the probability of a test was increased by the recent completion of Tunnel 3 at the Punggye-ri test range, Yoo told journalists.

North Korea’s six nuclear tests between October 2006 and September 2017 were all conducted at the underground facility in the northernmost North Hamgyong Province. North Korea watchers assessed this summer that the southern Tunnel 3 appeared fully ready for a new test, based on satellite images.

Last week, Seoul reported a North Korean test of a short-range ballistic missile in the Sea of Japan. The exercise was conducted as US Vice President Kamala Harris was on her way to visit regional allies Japan and South Korea. (RT)