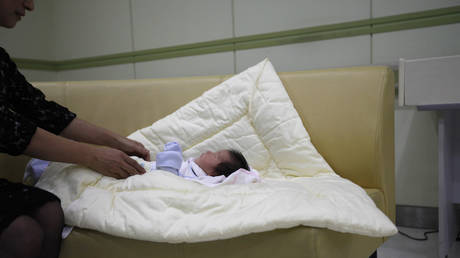 Public outrage over the grisly murder of a 16-month-old South Korean girl, allegedly by her adoptive mother, has already led to tougher child-abuse laws. Next, it may prompt the country to end its moratorium on capital punishment.

Prosecutors in Seoul demanded on Wednesday that the mother – identified only by her surname, Jang – be sentenced to death for the brutal killing of her daughter, Jeong-in, last October. They seek a seven-year, six-month prison sentence for Jang’s husband, who was charged with child abuse and neglect.

South Korea hasn’t carried out executions since 1997, due to a moratorium enacted by President Kim Dae-jung (1998-2003). However, its lawmakers have rejected efforts, including a push by former UN Secretary General Ban Ki-moon, to abolish the death penalty. South Korea’s Constitutional Court upheld capital punishment in 2010.

A handful of convicted murderers in especially egregious cases, such as an Army sergeant who killed five fellow soldiers in 2014, have been sentenced to death since the moratorium began. South Korea still has about 60 inmates on death row, even after at least 10 died of disease or suicide since Kim signed the moratorium in 1998.

Also on rt.com US executes first woman on federal death row since 1953 after Supreme Court intervenes

Over the years, government officials such as former Justice Minister Lee Kwi-nam and activists have called for ending the moratorium on carrying out death sentences. A 2017 poll by Realmeter found that 53% of South Koreans favored the resumption of executions, while 43% were opposed.

An aide to former President Park Geun-hye reportedly acknowledged in 2012 that it would take a groundswell of public support to resume executions, as there would need to be a “social consensus.” The killing of little Jeong-in, who died nine months after her February 2020 adoption, may help provide the needed momentum.

Crowds of protesters carried signs demanding the death penalty when Jang’s trial began in Seoul Southern District Court earlier this year. Public pressure led to the National Assembly passing a bill in February, known as the Jeong-in Act, that makes it possible to convict a child abuser of murder even if the defendant didn’t intend to cause death.

Read more:   Gene-edited food is coming, but will shoppers buy?

Prosecutors, who had been criticized for being too lenient in the case, upgraded charges against Jang to include murder rather than only involuntary manslaughter by child abuse. (RT)