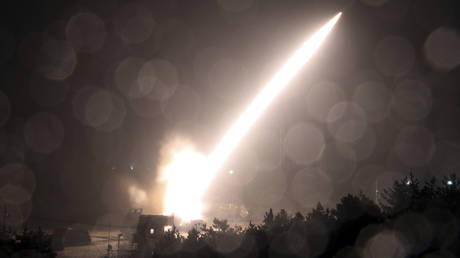 The malfunctioning weapon landed inside an air force base and prompted fears of an incoming attack A US-made Army Tactical Missile System (ATACMS) is fired during a joint military drill between the United States and South Korea at an undisclosed location in South Korea, October 5, 2022. © AP / South Korea Defense Ministry

A South Korean missile has crashed down at a military installation in the country’s northeast during a joint show of force drill with the United States on Wednesday, held in retaliation for North Korea’s latest weapons test, which reached Japanese airspace.

Seoul’s Joint Chiefs of Staff confirmed the incident, noting that a short-range Hyunmoo-2 ballistic missile encountered technical problems and fell out of the sky over the town of Gangneung, located some 56 miles (90 kilometers) from the border with North Korea. No casualties resulted from the crash, though a blast was reported at an air base in the town.

Military officials said they are still working to determine the cause of the missile’s “abnormal flight.” The accident took place during a joint drill with Washington, which also saw both sides fire off two short-range Army Tactical Missile Systems (ATACMS) each and another South Korean Hyunmoo-2 – what Seoul called a show of strength in response to a missile test by the North on Tuesday.

Footage purporting to show a large fire at the air base circulated online for hours before the government commented on the crash, stoking fears of a possible attack by the DPRK after one of its most significant weapons launches in years.

An explosion near Gangneung last night caused a social media storm in South Korea. Zero media reports or emergency alerts, raising suspicions of a cover up, a jet crash, or a missile launch.It turns out it was the latter, gone very wrong.pic.twitter.com/AjT6dHPcYL

Tuesday’s test passed over a portion of northern Japan’s Aomori Prefecture, the first time a North Korean missile reached the country’s airspace since 2017. US President Joe Biden and Japanese Prime Minister Fumio Kishida both condemned the move in the “strongest terms,” while the European Union slammed Pyongyang for a “reckless and deliberately provocative action.” Washington has called for a meeting at the United Nations Security Council to discuss North Korean missile launches this year – which have already reached a record number since leader Kim Jong-un took power in 2011 – though it remains unclear whether a sit-down will go ahead amid objections from Moscow and Beijing. (RT)