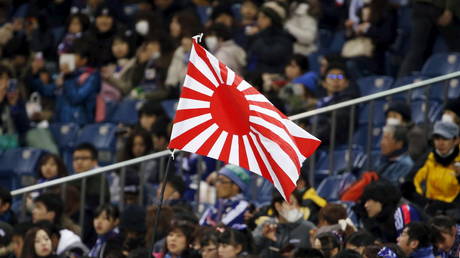 South Korea has asked the International Olympic Committee (IOC) to ban the Japanese “rising sun” flag at next year’s summer Olympic Games in Tokyo, comparing the symbol with the Nazi swastika.

In a written request addressed to IOC president Thomas Bach, South Korea’s Ministry of Culture, Sports and Tourism expressed its concern over Japan’s plans to display the flag during the Games despite South Korean protests.

South Korean officials said that the Rising Sun was associated “with Japanese imperialism during Japan’s military aggression in Asia including the Pacific War since the end of 19th century,” bringing parallels with the swastika which reminds “Europeans of the nightmare of World War II.”

The flag, which features a red sun with 16 rays radiating from the center, has been used by Japan for many centuries and is still flown by Japan’s Maritime Self-Defense Force. It differs from the country’s official flag, a red disk on a white background, which will be used by its Olympic team.

Last month, South Korean officials asked Tokyo Games organizers to ban any use of the rising sun flag during next summer’s sports extravaganza, although their request was snubbed.

Read more:   Iran's oil minister: The best way to prevent oil prices from going up is not to apply sanctions to Iran

“It is widely used in Japan; the flag itself is not considered to be a political statement, so it is not viewed as a prohibited item,” the Tokyo Organizing Committee said.

In its letter to the IOC, South Korean officials said the flag stirs memories of life under Japanese colonial rule, stressing that it cannot be a symbol which promotes Olympic values. (RT)