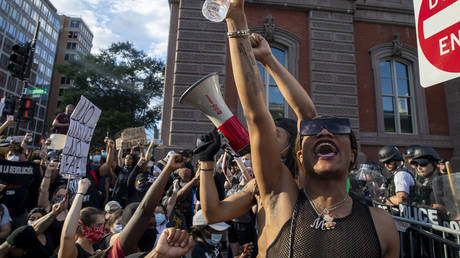 A protest in Lafayette Square Park on May 30, 2020 in Washington, DC. © Getty Images / Tasos Katopodis

Many American pundits and pontificators are telling their followers, readers, listeners, and viewers that the Russian press is lapping up – and exploiting – the current violent disorder in the US. This isn’t true.

For the past few days, as uproar rages across America, various prominent folk have reached for the usual ‘blame Russia’ deflection technique. Some of it has been quite demented.

Ranging from people claiming that Russian news reporters covering the events are actually orchestrating them, to others alleging the whole thing is a dastardly Kremlin plot. Or a “Russian intelligence” operation, to be precise.

Others say the Russian president “hoped” for events such as these when he “backed” Donald Trump’s Presidential bid in 2016. Just like what happened in Ferguson (Michael Brown) in 2014 was Putin’s wish when he was friendly to Barack Obama. Indeed, by this kind of logic, the 1992 Los Angeles riots (Rodney King) were inspired by Putin’s high regard for Bill Clinton.

Others have tried to compare the grotesque violence seen across the US with last year’s Moscow protests. Which is like trying to equate gate-crashing a Teddy Bear’s picnic to becoming an actual bear’s picnic. 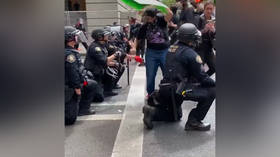 Seva Gunitsky, a Canada-based academic probably put it best when he tweeted that “Russia is not really a place anymore but a psychological coping mechanism.”

The other weird weekend trope has been the idea that Putin is “smiling,””laughing” or “happy” over the breakdown of order in the US. Added to the chorus claiming Russian media is going to town on coverage.

It’s true that RT has covered it widely. But RT is an International broadcaster, so it would be far stranger if this network ignored it. Concerns of this nature are amusing considering how American journalists – and state officials – relish protests elsewhere in the world. Especially in ‘bad’ countries.

With all this in mind, it’s useful to see if Russian media really is giving extensive coverage to the US protests. On Monday, Kommersant, an independent daily, didn’t even mention the US crisis in its main headlines. Instead, coverage was buried down in the World News section, with the focus on how ‘America is beginning to get tired of riots.’ Reporter Alexey Naumov told his readers “calls for an end to the atrocities are heard from both sides of the political spectrum and from representatives of the general public all around the country, but there is no end to the violence.”

Read more:   "The co-chairs have repeatedly stated that status quo must be changed" - President Aliyev

Russia’s best-selling newspaper, Moskovskij Komsomolets, again ignored the US story at the top of its homepage. Further down it carried an interview with Valery Garbuzov, a Russian scholar focused on North America. He said that “crime, drug addiction, and alcoholism” greatly affect the black community in the US, explaining that “the American state has been trying to solve this problem for decades.” Adding how African Americans hate Trump “with all the fibers of their souls” because of his reputation as a racist.

At RIA Novosti, one of the main state-backed news organizations, the events were given more prominence. But the angle was about how many in the US are blaming Russia. In an op-ed Victor Marakhovsky especially focused on CNN, saying its relations with Trump are “generally slightly worse than Iran and Israel.” The writer added that the “loss of global political and economic, and perhaps power leadership” is causing Americans to blame external forces for their home-grown problems.

Pro-Kremlin tabloid Komsomolskaya Pravda had two foreign-news stories in its main headlines. One was a report on the “Balkan Miracle,” hailing former Yugoslav countries (such as Serbia and Croatia) for their responses to Covid-19. The other was an interview with the Italian Ambassador to Russia Pasquale Terracciano, who has thanked Russia for its help in the fight against coronavirus in his country.