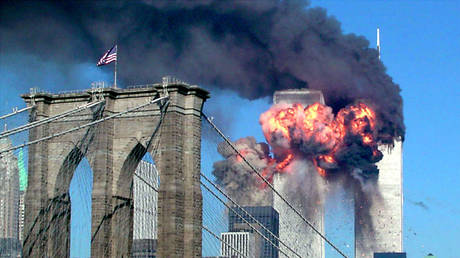 On the anniversary of the most devastating terrorist attack on US soil, a story by the New York Times suggested that “airplanes” brought down the twin towers. The seeming shift of responsibility did not sit well with readers.

“18 years have passed since airplanes took aim and brought down the World Trade Center,” read a tweet from the New York Times on Wednesday. “Today families will once again gather and grieve at the site where more than 2000 people died.” Inside an accompanying article, the same bizarre sentence was repeated.

Though technological dystopia was all the rage in 2001, what with the success of ‘The Matrix’ two years earlier and the passing of Y2K after that, the 9/11 attacks were not carried out by sentient airplanes, but by terrorist hijackers. Enraged readers made sure the NYT knew that, slating the newspaper for omitting the terms ‘Islamic terrorists’ or even the less-loaded ‘Al Qaeda’ from its story.

With autonomous airplanes, the @nytimes turned the 9/11 terror attacks into the opening narration of Terminator 2. pic.twitter.com/w89TxlYn23

Man, those towers really must have done something to upset those airplanes. https://t.co/N0WUjV2Gt5

And 18 years later, we still somehow allow airplanes to be legal. Let that sink inhttps://t.co/1vVE6cPaTW

The Times later deleted the tweet and amended its story, which, this time around, read: “Eighteen years have passed since terrorists commandeered airplanes to take aim at the World Trade Center and bring them down.” Responsibility was placed squarely with Al Qaeda in the updated article.

Read more:   OSCE ODIHR to monitor all aspects of electoral process in Azerbaijan

But why the strange phrasing in the first place? The Times did not report the recent mass shootings in Texas as the work of a disembodied AR-15. Nor does the paper attribute President Donald Trump’s executive orders to levitating pens, or climate change to fossil fuels deciding to burn themselves. (RT)

Syrian army takes over key town from rebels in Idlib

10:26 US troops injured in Iran missile strike rises to 50: Pentagon

10:00 OSCE ODIHR to monitor all aspects of electoral process in Azerbaijan

09:26 Death toll from novel coronavirus climbs to 125 in China’s Hubei

04:13 Trump’s empire-style plan to bring war rather than peace to Middle East

03:13 Trump’s ‘deal of the century’ is set to cause outrage, but won’t change anything – George Galloway

02:26 Europe keeps Trump’s Israel-Palestine ‘peace plan’ at arms’ length, but other US allies rush to embrace

00:39 Major earthquake strikes in Caribbean between Jamaica and Cuba