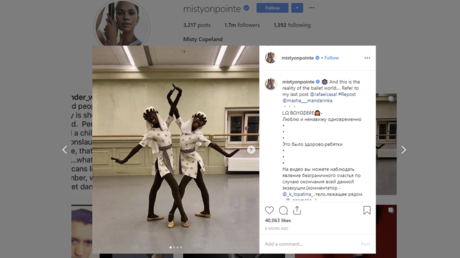 The US may be cannibalizing itself with social justice dogma, but some places remain untouched by the long arm of the woke. Not anymore, as a prominent ballerina took to hounding Russian children on the internet for ‘racism.’

Ballerina Misty Copeland made history in 2015 by becoming the American Ballet Theater’s first black principal dancer. She’s since appeared in productions of ‘Swan Lake,’ ‘Romeo and Juliet’ and ‘The Nutcracker,’ among others. Lately, however, she’s also found time to publicly shame Russian children for not measuring up to American standards of political correctness.

In an Instagram post on Sunday, Copeland called out a pair of teenage dancers from the Bolshoi Ballet Academy – one of whom is 14 years old – for appearing in blackface, apparently during a rehearsal of ‘La Bayadère.’

Copeland’s followers saw red, and several reported the dancers for racism. To help them, Copeland tagged one of the dancers in her post.

“No doubt they will be upset and embarrassed by the online backlash but it would not be undeserved,” one wrote.

Amid cries of “terrible” and “disgusting,” some commenters chimed in to remind Copeland that the girls in all likelihood didn’t get to choose their own costumes, and don’t deserve to face the torches-and-pitchforks mob alone. “This is so wrong,” one said, but added that “the girls…have also been forced to dress like this and wear this makeup because of the company.”

Another pointed out that ‘La Bayadère’ was first staged in 1877, when the idea of ‘blacking up’ was not considered racist. Staging it in this day and age, he said, was Bolshoi Ballet’s own bad-taste decision.