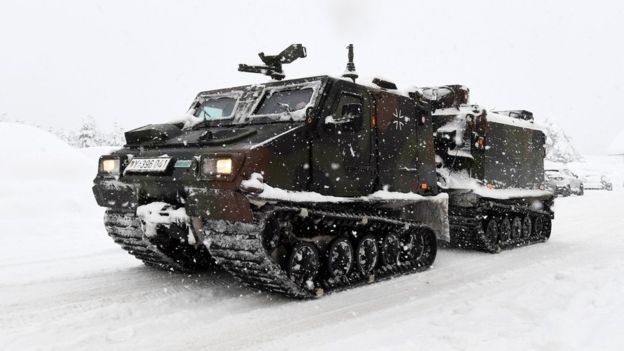 The Red Cross helped drivers stuck on a motorway in the southern German state of Bavaria and a nine-year-old boy was killed by a falling tree.

The front of a Swiss hotel was hit by an avalanche and a winter storm made roads impassable in Sweden and Norway.

Austrian rescuers had to battle through chest-deep snow to reach a snowboarder.

The 41-year-old Pole had lost his way after going off piste at the resort of Schlossalmbahn.

There was some respite in Austria on Friday, after three metres of snow fell in some parts in previous days. Seven people have died in the past week and two hikers have been missing since Saturday.

“Such quantities of snow above 800m altitude only happen once every 30 to 100 years,” said Alexander Radlherr from Austria’s Central Institution for Meteorology and Geodynamics.

The Austrian military sent helicopters to blow snow off treetops to reduce the risk of trees falling on roads and rails.

In Sweden wintry storms ravaged parts of the north. One area recorded winds of 49.7m per second (111mph) as Storm Jan ravaged Stekenjokk near the Norwegian border.