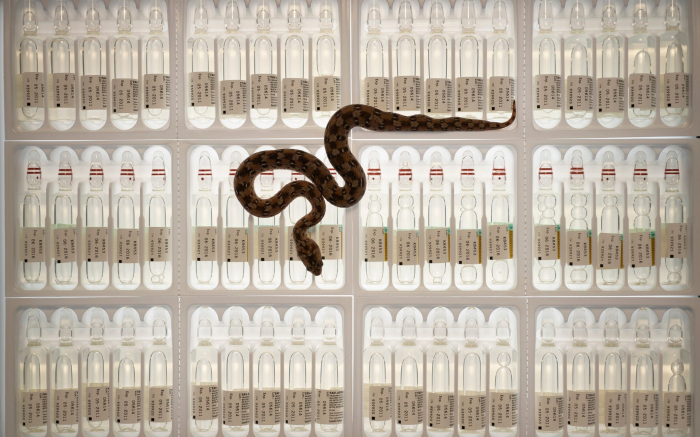 Millions of pounds is being invested into treatments that will improve survival rates for people bitten by venomous snakes.

Snakes bites are thought to kill up to 138,000 people each year, with experts calling them ‘the world’s biggest hidden health crisis’.

The charity the Wellcome Trust has now announced it will invest £80million ($102m) into a programme that aims to make antivenom medication cheaper, safer and more effective.

Professor Mike Turner, director of science at the Wellcome Trust, said: ‘Snakebite is – or should be – a treatable condition.

‘With access to the right antivenom there is a high chance of survival.

‘While people will always be bitten by venomous snakes, there is no reason so many should die.

‘Treatment has progressed little in the last century, and is too rarely accessible, safe and effective in the places where it is needed the most.

‘There has been almost no investment in snakebite research over the last decade – but it’s also one that is solvable with support from WHO [World Health Organization], national governments, industry and other funders.’

The investment comes as the WHO prepares to publish its first strategy on snake bites next week, with the aim of halving related deaths and disabilities by 2030.

The WHO calls snakebites ‘arguably the world’s biggest hidden health crisis’, with one person dying every four minutes.

Antivenom drugs are made by injecting an animal, such as a horse or sheep, with a small amount of venom, which causes its immune system to produce antibodies against it.

This was first discovered by the French physician Albert Calmette in 1896 after a flood caused cobras to invade a village near Saigon, biting at least 40 people and killing four.

Calmette discovered extracting blood from horses who had been bitten and then injecting it into snack-bite victims boosted survival.

Horses and sheep have ‘robust immune systems and produce powerful antibodies that can bind to snake-venom components’, according to the WHO.

Even today, antibodies are taken from the animals’ plasma and purified, before being given to patients to ‘enable their immune defences to eliminate these toxins’.

Although effective, the WHO claims antivenom’s efficacy is limited by ‘poor regulatory frameworks’, ‘inadequate investment’ and ‘traditional beliefs that associate snakebite envenoming with supernatural events’.

Dr Philip Price, science lead for snakebites at the Wellcome Trust, told the BBC: ‘It’s not without risk to inject this directly into the patient.’

Different types of bites require different antivenoms. As a result, up to 90 per cent of the medication in Africa is thought to be ineffective.

Patients are also often forced to travel for hours or even days to get to their nearest hospital, by which time it may be too late.

Read more:   How rich people could help save the planet from climate change

As a result, of those who survive, 400,000 suffer life-changing injuries each year. These may include paralysis, kidney or liver failure, bleeding or amputation.

Deaths are rare in countries like the US and Australia where health systems are good and antivenom stockpiles are available.

Farmers and children in living in rural Africa, Asia and South America tend to be the worst affected.

Dr David Williams, an expert on snakebites at the WHO – who has been bitten six times – added: ‘Many already live in poverty and the consequence of snakebite is that they are driven further into debt and despair, even if they survive.’