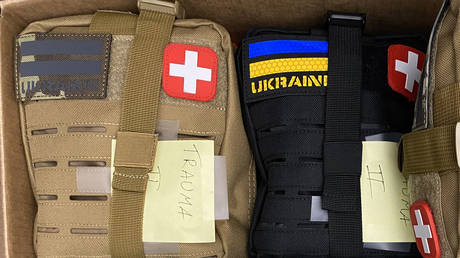 Some 30 Ukrainians, Spaniards, Germans, and Moroccans have been arrested by Spanish police for smuggling cannabis, taking advantage of a security loophole enjoyed by Ukrainian aid “solidarity convoys.” The perpetrators were allegedly using this scheme to sneak the drug through customs, the authorities revealed on Monday.

Officers first took notice of a group of Ukrainians collecting and storing cannabis on the Costa del Sol. The drugs were packed in vacuum bags, placed in cardboard boxes labeled as humanitarian supplies and aid, and stacked on vans with Ukrainian license plates. From there, the smugglers could move their merchandise throughout Europe via these pseudo-Ukrainian solidarity convoys, able to “pass under the radar of police and border controls” while visiting other countries, the Guardia Civil said in a statement.

Read more:   EU wants to agree on mutual recognition of Covid-19 certificates with Russia but Moscow has yet to apply, bloc's ambassador claims

In total, the bust netted nearly €800,000 ($847,000), as well as six guns and 2,500 cannabis plants. The alleged smugglers were picked up in several locations across Andalusia, including Malaga, Granada, Cordoba, and Seville, and have been charged with offenses that include drug trafficking, membership in a criminal organization, and illegal weapons possession. 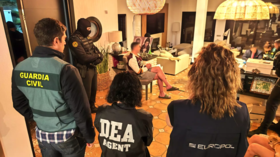 Monday’s bust came less than a month after the Guardia Civil arrested a network of 20 Spaniards who between them held the largest cache of cannabis ever found in Spanish history – some 32 tons of the drug, with a street value upwards of €66 million.

The EU has seen a banner year for drug busts, with customs agents in Belgium seizing so much cocaine since the start of 2022 they are having difficulty disposing of all of it. As of last month, it was estimated a record-setting 100 tons of the drug were seized this year in the port of Antwerp alone.

Europol claimed last month to have taken down a cocaine “super-cartel” responsible for a third of the trade in the drug across EU countries. The law enforcement agency arrested 49 suspects and confiscated luxury vehicles, weapons, and large sums of cash in addition to some 30 tons of drugs. (RT)