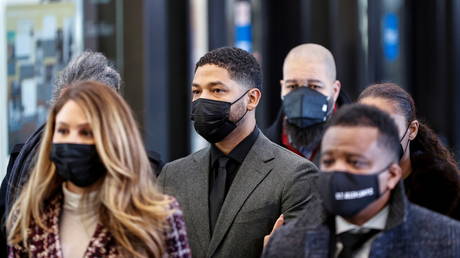 Chicago actor Jussie Smollett denied accusations that he paid two Nigerian brothers to help him stage a fake crime in January 2019, saying a $3,500 check he gave the men was for diet and exercise advice.

“There was no hoax,” Smollett said on Monday, as he took the stand in his trial on six felony charges stemming from allegedly false reports that he made to police. His lawyers have suggested that the two brothers accused the ‘Empire’ star of orchestrating his own attack as part of a plot to extort $2 million from him.

Lawyer Nenye Uche also claimed last week that the two men were motivated by homophobia and their dislike of Smollett, who is gay and black. But the actor testified on Monday that he had a sexual relationship with one of the brothers, Abimbola Osundairo, who worked on the set of ‘Empire,’ and did drugs with him. He added that he also met Olabinjo Osundairo but didn’t trust him and noted that “he kind of freaked me out.” (RT)

Nazarbayev’s son-in-law has sold his shares in Kazazot ‘s company. Timur Kulibayev, the son-in-law of…