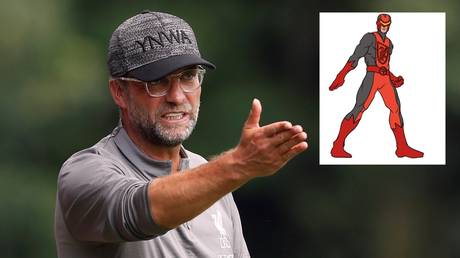 It was meant to be a creative campaign to raise awareness of social responsibility during the coronavirus crisis, but the Singapore government has been forced into a rethink after offending a group of Liverpool fans.

The government of the Asian city-state announced on Monday that it was “reviewing” its campaign featuring a band of Covid-19-battling superheroes dubbed the Virus Vanguard, after one of the fictional characters upset local Liverpool lovers.

“The Virus Vanguard is undergoing a review. We have received quite a lot of feedback on the characters and we will be reviewing them. We are sorry if we offended anyone,” the government said in a Facebook post, along with blacked-out images of the superheroes.

The hardy band was made up of five fictional Covid-19 combatants – Circuit Breaker, Fake News Buster, Dr Disinfector, Care-leh Dee and MAWA (Must Always Walk Alone) Man – each of whom had special powers to help remind Singaporeans of their responsibilities during the coronavirus pandemic.

The Singapore Government has created a team of superheroes to fight the Coronavirus/COVID-19. pic.twitter.com/H76e5thfq6

But it was MAWA Man who fell foul of local Liverpool fans due to his name and backstory.

“His hatred for Liverpool so far exceeds his love for Man Utd that it manifested as a telekinesis power.”

MAWA Man’s outfit also featured the Liverpool crest with a red line through it to hammer his hatred home.

the campaign has been taken down due to backlash – a not insignificant amount from Liverpool fans mad at the social distancing hero “Must Always Walk Alone (MAWA) Man” pic.twitter.com/1P4vYjskMw

That proved too much to stomach for a local Liverpool fan club, who set up a petition signed by more than 800 people to get the character scrapped.

“‘You’ll Never Walk Alone’ is a song that was collectively used by most European radio stations as a show of solidarity amidst the Covid-19 lockdowns,” the upset fan group fumed. (RT)