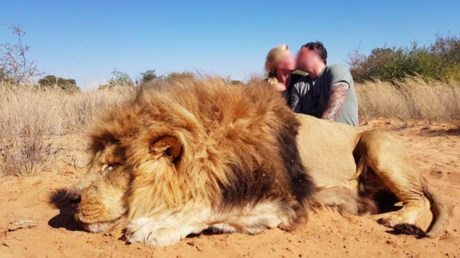 A hunting couple pictured kissing over the corpse of a slain lion they’d just killed is generating outrage and has increased calls for an end to trophy hunting.

Darren and Carolyn Carter kissed after killing a lion on a hunting tour in South Africa with Legelela Safaris, which shared the photograph on its Facebook page, which now appears to have been made private. “Well done,” it wrote. “A monster lion.”

The Carters run a taxidermy company in Edmonton, Canada. When asked about the images, they told the Mirror they “aren’t interested in commenting on that at all,” adding, “It’s too political.”

The lion appears to have been bred in captivity for the purpose of being gunned down by trophy-hunting enthusiasts. Legelela offers giraffe hunts for £2,400 and says prices for its lion, leopard and elephant tours are available on request. (RT)

Listening to Mike Pence’s history, you might think it wasn’t Soviets but Americans who liberated Auschwitz

France’s hardleft trade unions on Friday threatened industrial action for months to come, as they…

German man kills six of his family in small town

China is marking the Lunar New Year, one of the most important dates in its…

The record-setting stellar explosion SN 2006gy was 50 billion times brighter than our sun, with…

02:26 Listening to Mike Pence’s history, you might think it wasn’t Soviets but Americans who liberated Auschwitz

22:39 German man kills six of his family in small town

21:26 One of the brightest explosions ever seen was actually a giant star EATING its neighbor – study

18:13 Erdogan showers German chancellor with gifts as the two meet in Istanbul (PHOTOS)

17:52 PACE to send 32 observers for parliamentary elections in Azerbaijan

16:52 US and Chinese scientists join efforts develop vaccine against coronavirus

16:45 Shvydkoy: Azerbaijan is an important strategic partner for us