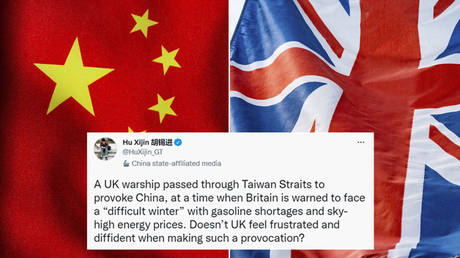 The outspoken editor of the Global Times has taken aim at the UK, highlighting Britain’s internal issues such as fuel shortages, as a British naval vessel sailed through the disputed Taiwan Strait, provoking China. 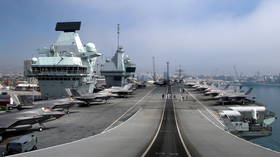 On Monday morning, the UK Defence Journal, an independent military journal, posted on its Twitter account, sharing a story about Royal Navy vessel HMS Richmond transiting through the Taiwan Strait “to demonstrate freedom of navigation.” The journal claimed the move was “likely to anger Beijing,” as Beijing believes the island of Taiwan is inseparable from mainland China and says it has territorial rights to the waters between the two nations.

And it wasn’t long before Beijing responded. While the Chinese military condemned the British voyage as “malicious,” Hu Xijin, the outspoken editor-in-chief of the state-run Global Times, was slightly more cutting with his remarks.

Hu questioned why Britain was sending a Royal Navy vessel to “provoke China at a time when Britain is warned to face a ‘difficult winter’ with gasoline shortages and sky-high energy prices,” referencing the UK’s panic-buying-induced fuel shortages and gas crisis. “Doesn’t UK feel frustrated and diffident when making such a provocation?” he added. (RT)