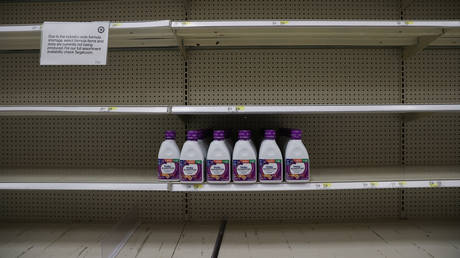 The shortage of baby formula currently gripping the US started during the Covid-19 pandemic. In 2021, there were reports that families across the country were struggling to find key baby products like diapers, wipes and formula. The shortage was mainly blamed on supply-chain issues – however, some experts pointed out that panic buying was aggravating the situation, too. During the pandemic, it was hardly a surprise that people were stocking up on products they deemed essential.

According to Datasembly, a real-time product data provider, for the first seven months of 2021, the out-of-stock percentages “were relatively stable” and fluctuated by between 2% and 8%. Then the situation started to worsen and, in January 2022, baby formula shortages hit 23%.

In the US, there are four companies holding the largest market share in the formula manufacturing industry: Abbott Laboratories, Mead Johnson, Perrigo Company PLC and Nestle Sa. The country normally produces 98% of the formula it consumes. So, a disruption affecting one of the giants became a key factor to make the shortage critical.

In February 2022, Abbott – which is estimated to control over 40% of the formula market – initiated a voluntary recall of several products manufactured in Sturgis, Michigan. According to the US Food and Drug Administration (FDA), four babies were admitted to hospital after consuming formula potentially infected with cronobacter and produced at the facility in question. Two of the infants died.

According to the FDA, cronobacter bacteria is especially dangerous for newborn babies. It can cause sepsis or meningitis and bowel damage. Abbott reported that cronobacter was found in non-product contact areas of the Michigan facility. 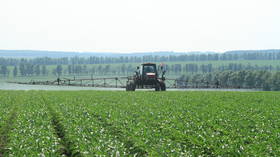 Hunger games: How the world’s farmers have become collateral victims of sanctions against Russia

“We believe our voluntary recall was the right thing to do. We will not take risks when it comes to the health of children,” Abbott CEO Robert Ford wrote in an op-ed for the Washington Post in May. “The data collected during the investigation, genetic sequencing, retained product samples and available product from the four complaints did not find any connection between our products and the four reported illnesses in children. However, the FDA’s investigation did discover a bacteria in our plant that we will not tolerate.”

“Inflation, supply-chain shortages, and product recalls have brought an unprecedented amount of volatility for baby formula,” Datasembly founder and CEO Ben Reich said. “We expect to continue to see the baby formula category being dramatically affected by these conditions.”

It took months for the US government to realize that the crisis was serious. “I don’t think anyone anticipated the impact of the shutdown of one facility,” US President Joe Biden said during a meeting with executives of five baby-food companies at the beginning of June. “Once we learned of the extent of it and how broad it was, we kicked everything into gear.” Biden also added that he hadn’t been aware of the extent of the crisis until April.

In May, the US president invoked the Defense Production Act to ensure that baby-food manufacturers had priority access to the resources they need. Also, the government launched the so-called “Operation Fly Formula,” making the Department of Defense import the formula from abroad by using commercial aircraft. The FDA issued guidance outlining “increased flexibilities regarding importation of certain infant formula products.”

However, all these measures were blasted as slow. Even FDA chief Robert Califf admitted, while testifying before a House subcommittee investigating the shortage, that his organization’s response was “too slow and there were decisions that were suboptimal along the way.”

Regarding the timely importation of materials, it turns out that the supply-chain issues are behind several shortages the US is facing now. Simultaneously with the baby-formula crisis, US customers are lacking tampons. The New York Times has reported that Andre Schulten, the chief financial officer of Tampax manufacturer Procter & Gamble, said on a recent earnings call that it had been “costly and highly volatile” to acquire the raw materials such as cotton and plastic. 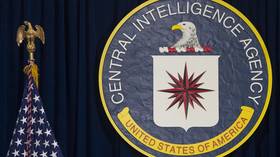 The situation with the baby-formula deficit included a very dangerous factor. One of the recalled formulas was EleCare – Abbott’s special hypoallergenic product used by infants and children with severe food allergies or gastrointestinal disorders, who require amino acid-based formulas. In Memphis, two children were hospitalized as their families were unable to get EleCare. In South Carolina, four babies were admitted to hospital as their parents tried to feed them substitutes or make formula at home.

At the end of May, authorities allowed Abbott to release limited quantities of EleCare for children in urgent medical need. Plus, the Sturgis facility reopened on June 4, and the company promised to prioritize production of EleCare.

Less than two weeks later, the disgraced facility had to be shut down again – this time due to flooding. “Abbott has stopped production of its EleCare specialty formula that was underway to assess damage caused by the storm and clean and resanitize the plant,” the company said in a statement. “We have informed FDA and will conduct comprehensive testing in conjunction with the independent third party to ensure the plant is safe to resume production. This will likely delay production and distribution of new product for a few weeks.”

In June, the FDA opened one more investigation into the death of an infant, which happened in January. According to the agency’s statement, cited by the media, the victim had been given Abbott’s infant formula.

Almost simultaneously with the temporary reopening of Abbott’s troubled factory, it was reported that between December 1, 2021, and March 3, 2022, the FDA received nine reports of deaths among babies who had consumed infant formula produced there. This information was obtained by the eFoodAlert website within a list of 128 consumer complaints supplied by the FDA in response to a Freedom of Information Act request. According to the report, two of the deaths mentioned salmonella, a bacteria that causes salmonellosis – a disease characterized by fever, diarrhea and abdominal cramps. Some 17 other illness complaints were also related to salmonella, eFoodAlert said. “The FDA did not respond to eFoodAlert’s request for comment on what was done to follow up on the seven infant death reports that did not involve cronobacter,” the website noted. 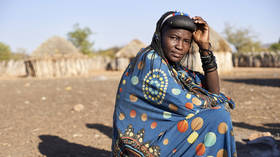 ‘You live like an animal’: Why can’t the world win the fight against FGM?

Adding to the concerns, the Wall Street Journal reported that in February 2021 – a year before the disruption – a former Abbott employee complained about a host of problems at the Sturgis plant, including “failing equipment in need of repair and formula released without adequate evidence that it was safe for consumption.” According to the WSJ, the complaint was filed under the US Labor Department’s Occupational Safety and Health Administration’s whistleblower-protection program. An Abbott spokesperson told the outlet that the company was aware of the concerns, but was not able to confirm the allegations.

While observing the extent of the crisis, one may ask: Why do American parents need so much baby formula after all? The American Academy of Pediatrics recommends exclusively breastfeeding a baby for about six months, and keep doing so as complementary foods are introduced for a year or longer.

However, according to the US Centers for Disease Control and Prevention, citing data from 2017, although most newborns started breastfeeding (84.1%), only 58.3% of infants were being breastfed at six months. “Low rates of breastfeeding add more than $3 billion a year to medical costs for the mother and child in the United States,” the CDC says. The data shows that 60% of mothers do not breastfeed for as long as they intend to. According to the CDC, it’s not only about health issues. A lack of support from families, employers or hospital staff is also named among the factors that influence mothers.

Dr. Melissa Mialon, research assistant professor at Trinity Business School (Trinity College Dublin, Ireland), has conducted a study about corporate political activity by the baby food industry in the US. She told RT that infant food manufacturers have influence at different social levels, from politicians to the scientific community.

“For example, Nestle funded a big study in the US called FITS (Feeding Infants and Toddlers Study),” she points out. According to Nestle’s website, FITS is actually “the largest dietary intake study in the United States that examines what and how infants and toddlers eat every day.”

Dr. Mialon, who is a consultant for various health and consumer organizations, including the WHO, also says that, in the US, a lot of baby formula is purchased and distributed with the help of the authorities. “A lot of people rely on the WIC program (Special Supplemental Nutrition Program for Women, Infants, and Children). It’s a government program helping parents to feed their families. It’s supporting breastfeeding, but it’s also providing a lot of infant formula to parents. So, for parents who are poor, it’s easy to decide to take the formula because it’s paid for by the government. So, when you see a brand that has helped people, a brand endorsed by the government – you start to believe it’s good.”

In February, the World Health Organization, together with the United Nations International Children’s Emergency Fund (UNICEF), issued a report highlighting how aggressively baby-food companies are promoting their products among families with newborn children. A total of 51% of parents and pregnant women surveyed by the organizations said they had been targeted with marketing from formula milk companies. In the UK, for example, exposure to formula milk marketing reached 84% of all women who participated in the research. Plus, more than one-third of all the surveyed women said a health worker had recommended a specific brand of formula to them.

“A sustained flow of misleading marketing messages is reinforcing myths about breastfeeding and breast milk, and undermining women’s confidence in their ability to breastfeed successfully. These myths include the necessity of formula in the first days after birth, the inadequacy of breast milk for infant nutrition, that specific infant formula ingredients are proven to improve child development or immunity, the perception that formula keeps infants fuller for longer, and that the quality of breast milk declines with time,” the WHO and UNICEF warn.