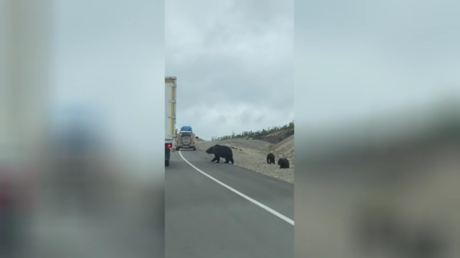 A stunning video of a family of bears approaching cars on a road in the Far East of Russia has gone viral after a driver filmed the dangerous animals coming up to vehicles in an apparent attempt to beg humans for food.

As seen in the footage, filmed earlier this month but only published on Sunday, a bear and a group of cubs fearlessly approach vehicles, standing on their hind legs.

The incident happened on a highway in the Amur region, close to Russia’s frontier with China. The route, which goes from the city of Tynda to a small village called Never, is lined on both sides with vast forest. In the video, motorists can be heard using loud car horns to try to scare the bears away. (RT)