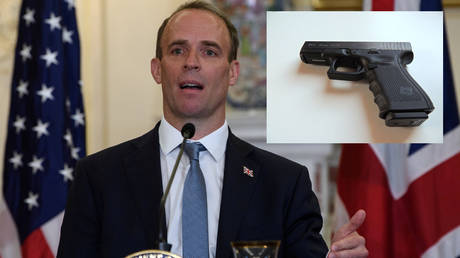 UK Foreign Secretary Dominic Raab was returning from a trip to Washington, DC when the incident took place. © Nicholas Kamm/Pool via REUTERS

Police scrambled to the scene after a shocked cleaner found a loaded gun on a plane at Heathrow Airport. Astonishingly it emerged that the pistol had been accidentally left behind by UK Foreign Secretary Dominic Raab’s bodyguard.

The cleaner found the unattended semi-automatic Glock 19 in its holster on board a United Airlines jet. The aircraft had landed in London from Washington DC, where Raab had been to discuss Brexit with US politicians.

The discovery prompted a team of cops to descend on the scene, but the officers were stood down when it became apparent that the weapon belonged to a protection officer assigned to the foreign secretary.

“For whatever reason, he took off his holster with the loaded Glock pistol inside and laid it on the seat,” a source told the Sun newspaper. (RT)