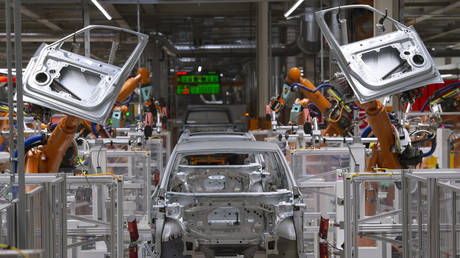 Robots work on an electric car ID.3 body at the assembly line at the plant of the German manufacturer Volkswagen AG (VW) in Zwickau, Germany © AP / Jens Meyer

A new study by the European Association of Automotive Suppliers (CLEPA) has found that half a million jobs could be lost in the EU by 2040 with the ban on combustion-engine cars and transition to electric vehicles.

The survey, which was conducted by PwC, showed that more than two-thirds of those jobs could disappear in the period of 2030-2035, making it difficult to mitigate the “social and economic impacts” caused by mass unemployment.

The report, however, also said that 226,000 new jobs would be created in the manufacturing of electric parts, reducing the net number of job losses to approximately 275,000 over the next couple of decades. (RT)