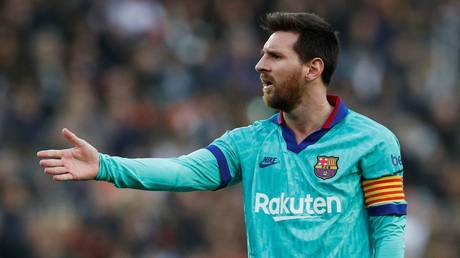 If new Barcelona boss Quique Setien wasn’t aware of the size of the task in front of him at the Camp Nou he certainly is now as his charges slumped to a 2-0 away defeat to fifth-placed Valencia on Saturday.

A Jordi Alba own-goal and a Maxi Gomez strike were enough to consign Barcelona to what was their fourth defeat of the season just two weeks after Setien replaced Ernesto Valverde in the hot seat.

The former Betis manager had won his two prior games in charge against Granada in La Liga and UD Ibiza in the Copa del Rey round of 32, but the loss on Saturday hands the ascendancy to rivals Real Madrid who are level on points but have played one game fewer in the Spanish top flight.

A stuttering performance by Barcelona was marked by an inability to translate possession into scoring chances, with Valencia having the better of the opening exchanges and it could have been even worse for Setien’s men had Gomez converted a first-half penalty to give his side the lead.

The loss, as well as the manner of the performance, will add to the pressure on Setien in his new role, with some supporters taking to Twitter to make known their disapproval of their side’s current issues on the pitch – with several fans (and one former player, in Gary Lineker’s case) taking front row seats on the ‘Setien out’ bandwagon, even if partly in jest.

Barça well beaten here by Valencia. Finishes 2-0. Would have been more but for Ter Stegen. Messi tried to get them going in second half & had half chances. If he didn’t know before, Setien knows size of job on his hands now.

So since the arrival of the great Setien: Barcelona got a lucky 1-0 win against GranadaNeeded a last minute winner to win against a Segunda division B team Lost 2-0 to Valencia that didn’t have their best player Parejo But hey beautiful football and 6000 passes 👍😭

Setien will have some time to steady the ship across the next few weeks, as Barcelona embark on a sequence of La Liga fixtures which should, in theory at least, be well within their capabilities.

It remains to be seen, though, if the negative feelings currently being fostered among Barcelona’s support could last past the crucial Champions League tie with Napoli next month.

The two sides are due to clash in the first leg of the Champions League round of 16 on February 25 and Barcelona faithful know, as does Setien himself most likely, that his time at the club could be very much expedited if the club tumble out of Europe on his watch. (RT)