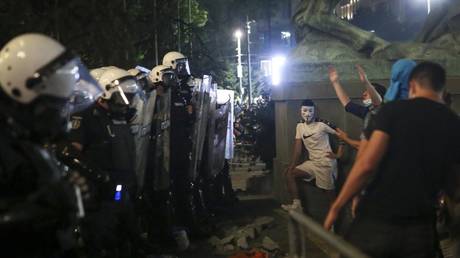 Protesters face police outside the entrance of the National Assembly building in Belgrade, on July 10, 2020 © AFP / Oliver Bunic

Police in Serbia have arrested dozens of people, including a Briton and a Tunisian, as crowds of protesters pelted stones at cops in Belgrade. Serbia’s government and police have accused “foreign factors” of instigating unrest.

The Serbian capital was consumed by unrest for the fourth night in a row on Friday, in what President Aleksandar Vucic described as “pure terrorism.” Crowds chucked flares at parliament and hurled stones at the lines of riot police outside the building.

71 people were arrested on Friday night, police director Vladimir Rebic said at a press conference on Saturday, per AFP. (RT)

The global death toll from COVID-19 surpassed 700,000 on Wednesday, according to the Johns Hopkins…

Trump: US Treasury should get cut of TikTok deal