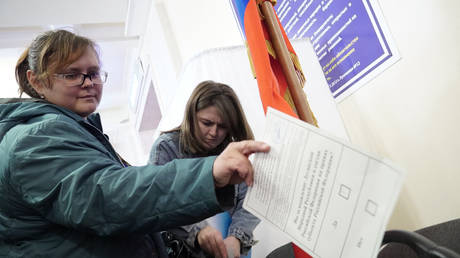 Belgrade says it will not recognize the outcome of the vote on joining Russia A polling station in Rostov-on-Don, Russia, September 24, 2022. © AFP

Serbia will not recognize the results of the referendums in the Donbass republics and Moscow-held territories of southern Ukraine on joining Russia, Foreign Minister Nikola Selakovic has said.

“On one hand, our commitment to the principles and rules of international law, the Charter of the United Nations, is crucial,” Selakovic told reporters on Sunday.

“And, on the other hand, it would be completely contrary to our state and national interests, contrary to our policy of respecting territorial integrity and sovereignty, and the commitment to the principle of the inviolability of borders.”

Kherson Region and large parts of neighboring Zaporozhye Region were seized by Russian troops after Moscow launched its military operation in the neighboring country on February 24. Russia recognized the independence of the Donetsk and Lugansk People’s Republics (DPR and LPR) this year. Both republics broke away from Ukraine in the wake of the 2014 coup in Kiev.

Ukraine and the West have rejected the referendum on joining Russia as illegal. Serbia, which has close historical ties with Russia and relies heavily on its energy supplies, has refused to impose any sanctions on Moscow or send weapons to Ukraine.

Belgrade also refuses to recognize the independence of Kosovo, a predominantly Albanian-populated region whose authorities seceded from Serbia in 2008. A UN mission was established in Kosovo and NATO peacekeepers were deployed to the region following an Albanian insurgency and NATO’s 1999 bombing campaign in Serbia.

The US and most Western countries recognize Kosovo as an independent state, while countries including Russia, China, and India consider it part of Serbia. (RT)