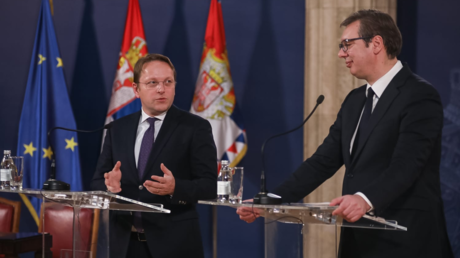 After the EU once again pressured Serbia to “align” with the bloc and sanction Russia, President Aleksandar Vucic said on Friday his country’s territory can’t be used to bypass the embargo. The EU says Serbia’s eventual membership is important but demands Belgrade recognize the breakaway province of Kosovo and sanction Moscow, both of which Vucic said he does not intend to do.

“No one can bypass the sanctions through Serbian territory, because we do not engage in crime or war profiteering,” Vucic said at a press conference in Belgrade, after meeting with the EU’s enlargement commissioner Oliver Varhelyi.

The Hungarian diplomat came to cajole Vucic into attending the December 6 regional summit in Tirana, which the EU sees as crucial for further expansion in the Balkans. The Serbian leader said earlier he would stay home in protest over a “shameful” decision by the ethnic Albanian government in Kosovo to treat fringe Serb politicians as community representatives.

Varhelyi explained that the “reforms” the EU previously demanded from Serbia are no longer enough, because the conflict in Ukraine threatens the entire continent. Brussels “needs Serbia to be on our side,” said Varhelyi, thanking Vucic for a “very clear promise” to help the bloc implement its sanctions against Russia. 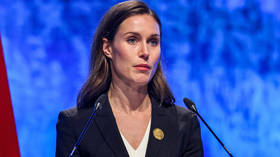 What exactly Vucic promised Varhelyi was not clear from the press conference, but Belgrade has publicly refused to sanction Moscow since February. Just last week, Serbian PM Ana Brnabic complained that the EU demands were “contradictory” because the bloc wanted Belgrade to deny its own territorial integrity when it comes to Kosovo, but sanction Russia for allegedly violating that of Ukraine.

“We need Serbia, a leader of Serbia, at the table” in Tirana, Varhelyi told reporters at the press conference, adding that the Ukraine conflict showed joining the EU is the only hope for peace on the continent. As for Kosovo, he said “both sides” need to engage in order for the talks to succeed.

Earlier during the conference, Vucic said in English that he’s had “enough of talk about both sides,” and that the ethnic Albanian government in the breakaway province has done nothing constructive for months and even years.

“I’m not crazy, drunk, or stupid,” Vucic said. “I see no point in going to Tirana, but I am willing to reconsider if someone can persuade me that one could be found.” (RT)