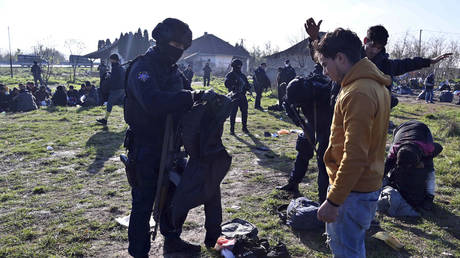 Serbian gendarmerie has detained 829 migrants who were in the country illegally, as part of Friday’s crackdown prompted by an overnight firefight on the border with Hungary. At least one migrant was seriously injured in the shoot-out, which the interior ministry in Belgrade said involved rival groups of human traffickers.

A total of 689 people were detained near Horgos, a village of some 4,000 residents on the Serbia-Hungary border. Another 140 people were rounded up in Belgrade as part of the same operation, the interior ministry said.

“We will have zero tolerance to those who abuse our hospitality,” said Interior Minister Bratislav Gasic. “The lives and property of Serbian citizens shall be protected.”

Gasic, previously the head of Serbia’s counterintelligence, said his visit was a signal to the population of northern Serbia that the police was serious about protecting them from illegal migrants and “criminal people smugglers,” according to Tanjug news agency.

The detained migrants will be sent to shelters in southern Serbia, the police said, adding that “regular checks” will be conducted going forward, to ensure the safety of both local residents and the migrants themselves. 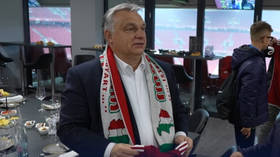 Friday’s round-up was triggered by videos posted on social media, one of a firefight in the woods outside Horgos, another showing two migrants walking around with assault rifles. Police said “multiple” suspects were arrested in relation to the shoot-out, while six people were detained on-site, including a 20-year-old with two gunshot wounds to the chest.

According to an RT Balkan investigation, “several thousand” migrants have camped out in a forest that was once a favorite picnic spot for the locals, but has turned into a “no-go zone” in recent years.

Migrants from all over the world seeking to claim asylum in the EU have traveled to Serbia before attempting to cross into Hungary. Hidden among them have been the perpetrators of terrorist attacks in Madrid, Paris and Wuerzburg, RT Balkan noted.

Budapest has responded by building a fortified border fence.