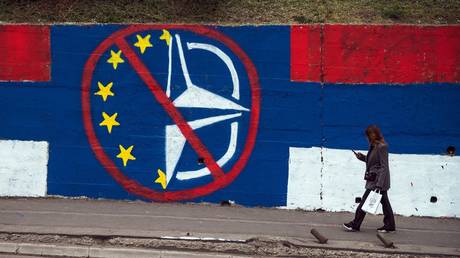 Lawmakers will urge the EU to freeze accession talks with Belgrade, unless it toes the line, US state-run media reported FILE PHOTO. An Anti-EU and Anti-NATO mural painting in Belgrade. © Andrej ISAKOVIC / AFP

The European Parliament may call on the EU to freeze accession talks with Serbia and funding for Belgrade over its ties with Moscow, US state-run broadcaster Radio Free Europe (RFE/RL) reported. Previously a group of MEPs stated that a country that does not sanction Russia cannot hope to join the bloc.

“The EU cannot continue accession talks with Serbia if they don’t align with EU sanctions against Russia. That’s what we will say in the Parliament’s upcoming enlargement report,” the Socialists and Democrats Group (S&D Group) tweeted on Monday, after Belgrade and Moscow inked a plan for bilateral consultations for the next two years.

The statement referred to a draft report on the EU’s enlargement strategy, the details of which were made public by RFE/RL on Wednesday. The station, which reviewed the document, said it includes wording calling on the EU to punish Serbia for not following Brussels in its relations with Russia.

In addition to freezing talks on joining the EU, MEPs want to recommend cutting Belgrade off from EU funding for the development of the Balkans, according to the article. Brussels needs to spend money “fully in line with the EU’s own strategic goals and interests,” the draft was quoted by RFE/RL as saying.

The EU cannot continue accession talks with Serbia if they don’t align with EU sanctions against Russia.That’s what we will say in the Parliament’s upcoming enlargement report.@TPicula: “Very disappointing coming from a country aspiring to join the EU” https://t.co/jas6vm7WQN

Croatian MEP Tonino Picula is the main author of the draft report. He is a member of the S&D Group, which sits on the Parliament’s Committee for Foreign Affairs and favors speeding up the EU’s expansion, including into Moldova and Ukraine. He called Serbia’s relations with Russia “very disappointing coming from a country aspiring to join the EU”.

The committee is to discuss the draft report on October 13, after which it will be submitted to parliament to be approved in a non-binding resolution, RFE/RL said. The vote is expected in November.

The diplomatic schedule that Serbia and Russia signed last Friday, triggered a wave of condemnation from US and EU officials. Peter Stano, the foreign affairs spokesman for the European Commission, warned that it raised “serious questions” for Belgrade and would be investigated. German MEP Viola von Cramon branded it “a serious scandal” that signals that the EU should suspend the accession talks. (RT)