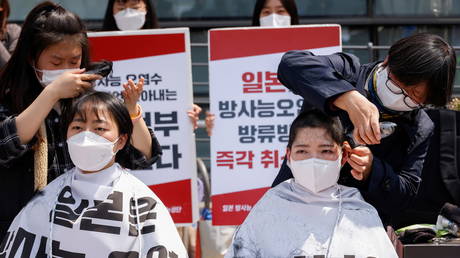 South Korea university students gets their heads shaved during a protest against Japan's decision to release contaminated water from its crippled Fukushima nuclear plant into the sea, in front of the Japanese embassy, in Seoul, South Korea, April 20, 2021. © REUTERS/Kim Hong-ji

More than 30 college students in South Korea’s capital have shaved their heads in front of the Japanese embassy to show their opposition to Tokyo’s plan to dump more than a million tons of nuclear wastewater into the ocean.

On Tuesday, crowds gathered around the Japanese embassy in Seoul to watch college students, both girls and boys, shave their heads in protest, calling on Tokyo to ditch their plans to dump nuclear wastewater from the defunct Fu